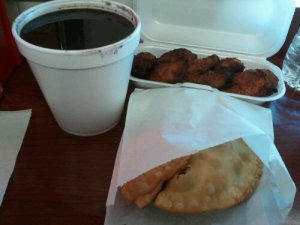 Monday’s happycow.net research turned up a cuban place with vegan empanadas. WHAT?!?!? Yes. This is pretty much when I first started to seriously think we could start looking for employment in Orlando. I’m not kidding!

Black Bean Deli‘s been around for a long time, and has even been voted Orlando’s best cuban restaurant. Though it’s not so much of a restaurant as a food counter, with just 5 or 6 stools for seating. Further research determined that they even have an empanada food truck that travels around the winter park area. WHAT?!?!?!! Yes. And it sounds like some of those amazing empanadas could possibly be vegan by their descriptions. (If so, start packing!)

So we paid them a little visit… 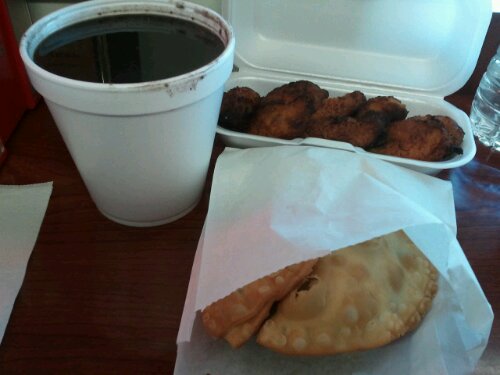 This was my dinner that I was only able to eat half of… a container of black bean soup (no rice, per my white rice hating preference), maduros (fried ripe plantains), and 2 vegan empanadas.

I was in absolute heaven. I even traded a couple maduros for a couple of Jeremy’s tostones (fried green plaintains) that were made to be dipped in my black bean soup. SO GOOD. The black bean soup, while being a little salty, was really good, and the platanos were cooked perfectly. The maduros have the right degree of burned cripy edges, and the tostones having the correct crisp outsides and tender middles.

The empanadas were a little different than what I’m used to, and certainly different than mine, filled with meat analogue and carrots and potatoes. This gave it a very cuban comfort food taste (like potaje). These were very good. But of course, pretty much anything in deep fried dough is going to be good. ; )