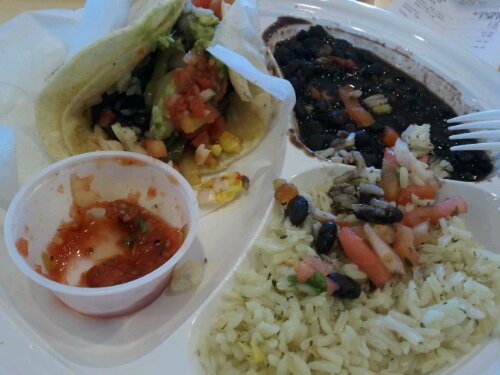 Top secret menu item at Zona Fresca that you can ask for… Grilled Veggie Taco Combo Plate! It’s totally cheap and delicious and filling, and you even get some chips with that!

It’s not on the menu, but you can ask for it, and it’s even cheaper than the meat ones, which are still under $6!

Sorry this picture is missing a taco. and some beans. 🙂

Surprisingly enough, with all of the restaurants that there are in Fort Lauderdale, there really aren’t many vegan options here. Sure there’s Sublime, the well known, all vegan, over priced, bland and uninspired restaurant, but I hate giving them my money, even if the profits do go to animals. That being said, let me tell you about a mexican place that’s really close to our new place, and at least has a little vegan section on their menu.

This review is actually long overdue. We dined at Tequila Sunrise last year when we got one of those groupon/living social vouchers. Back then they had the menu that’s currently up on their website. I ordered the vegan black bean tostadas, which I thought were great.

On this visit, the vegetarian/vegan menu was just a section of the regular menu, and a lot more limited. I was happy though, because they still had vegan enchiladas listed, even if the tostadas weren’t. 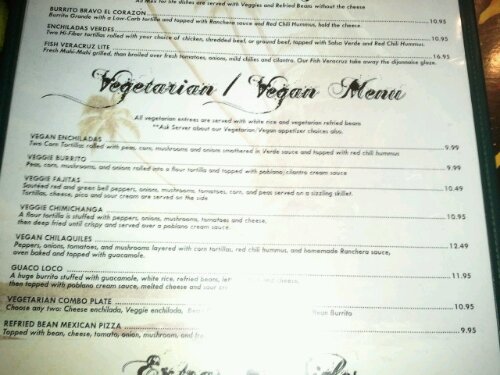 I specified that I didn’t want mushrooms at least 3 times. Mostly because it seemed like our waitress wasn’t paying attention. She let me know I could sub vegetables instead of white rice, so I said sure.

When my plate came and I spotted a mushroom in the vegetables, I remembered that I had not asked an additional time for no mushrooms, so I was still hopeful, but upon peering into my enchiladas I realized they were all over. A second waitress came out and said that there was no way to make the dish without mushrooms, because the veggies were already mixed. Then she came back and said they could do it with just onions & peppers inside. So I just ordered two tacos a la carte. Both the black beans and the refried beans are vegetarian, so I ordered one of each.

They came in very thick, delicious hot shells, and the black beans were really tasty. These were $3.50 each.

We eat mexican food A LOT. Half the time it’s from Taco Bell. (fresco bean burritos or the occassional 7-layer, no cheese, no sour cream!) And I admit, I don’t ever ask if the beans are vegetarian when I’m at a restaurant. So it’s nice to know that they are here. If you aren’t allergic and/or grossed out by mushrooms (like I am!), they have a good amount of well thought out vegan options for you. I mean, that enchilada dish really did look delicious. I was pretty disappointed that I had to give it back! So if you’re so inclined, it’s worth checking out. 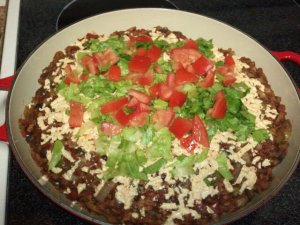 I originally wrote a version of this recipe over a year ago. It was the veganizing of a recipe that I’d already made vegetarian years before. It was one of my favorite go to recipes when I learned how to cook. There is something very comforting about all that yumminess atop a wonderful cornbread crust. I finally got to try it out last night, and here it is with some final tweeks! I use TVP, but you can use vegan crumbles instead to save a step, if you want to.

PS– I made this with a different [savory] cornbread recipe that I was trying out. That new cornbread turned out to be a fail, but the topping is delicious on it’s own or over some brown rice too, if you don’t feel like fussing with the cornbread part. Still broil the cheese on. Then you can use it as a tex-mex picadillo or with some lettuce, tomatoes, rice, etc. as a burrito or taco filling!

Recipe for your favorite cornbread (try mine!)
vegan butter to grease skillet

1. Prepare cornbread according to recipe directions and pour into the bottom of a greased large oven-proof skillet. (they say you can wrap a skillet handle really well with aluminum foil and cross your fingers, but i’ve never tried it.) Bake according to instructions, or until top is lightly browned, and toothpick inserted into center comes out clean. Set aside.

2. To reconstitute the TVP: In medium sauce pan, heat water, liquid smoke, worcestershire, bragg’s until it comes to a boil. Remove from heat, stir in TVP, and set aside.

3. Heat oil in second skillet to medium. Add onions and salt, cook for 5 minutes, or until translucent. Stir in bell pepper and cook an additional 2 minutes. Add TVP and spices and cook 3-4 minutes. Add refried beans and tomatoes, mix in until heated through. 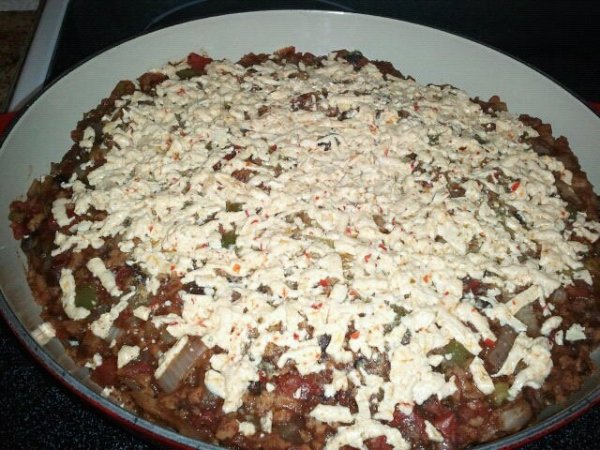 I thought I lost this photo in the phone freezing incident last week, but just discovered it on my computer! This was a super fast meal that was thrown together in 20 minutes. I had a ripe avocado and two big appetites, and came up with this super easy & tasty recipe on the fly.

1 ripe Florida avocado (the bright green ones, not the haas!), cut in half, seeded, and removed from skin

1. Add quinoa and water to a small pot. Bring up to a boil, and boil for about 2 minutes. Drop to simmer for 15 minutes. All of the water should have absorbed and left you with perfect quinoa. Fluff with a fork.

2. Meanwhile, heat water and seasonings in a saucepan for TVP. Once boiling, remove from heat, and stir in TVP. Cover and let sit for about 5 minutes.

3. Heat up beans in a large bowl (microwave) and stir in rehydrated TVP.

4. On each plate, make a large bed of quinoa, put one half of avocado on top, and fill generously with bean/TVP mixture.

I mixed the remaining quinoa in with the bean/TVP mixture, and we ate this too. Okay, we killed it. This could probably feed up to 3 people but then you’d have to divide up the avocado! Enjoy! 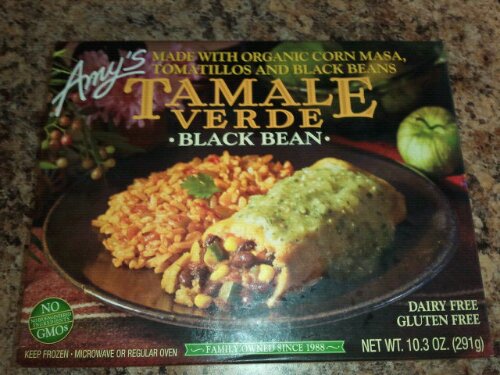 This is one of my favorites from Amy’s. It’s got all kinds of delicious goodness. I just open one end of the plastic bag and microwave it for 5 minutes, for a less fussy way to get from hungry to fed! I also like that they conveniently label all of their vegan items at the beginning of the ingredients list. I like to cut up the tamale into a bunch of small pieces and mix it into the yummy tomato-y rice. But that’s me, I’m a mixer of foods. Yummy! : )

Make sure you choose carefully. There’s an almost identical package for the one with cheese that I bought accidentally once in a hurry.

So I’ve been messing around with this recipe in my head for a few weeks now. It had been written since last week, but it took me until tonight to take it for a test run. I’ve been really wanting to make enchiladas ever since I picked up the new Daiya pepperjack cheese, but hate the process of actually rolling enchiladas, so I went with enchilada lasagna. My goal was to make this a quick & easy, painless but yummy dish, so I used taco seasoning to simplify the sauce making. I like the recipe from Quick & Easy Vegan Comfort Food, but you can use a premixed one. This one contains chili powder, garlic powder, onion powder, cayenne, paprika, cumin, salt & pepper. I keep it in a small container in the cupboard. 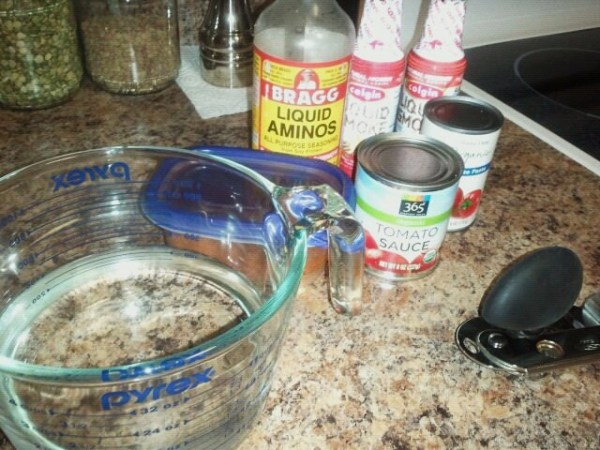 2 packages of crumbled tempeh
1 onion, chopped finely
2 garlic cloves, minced
1 large pepper or 2 small peppers, your choice (bell peppers work well here. I used about 3/4 of a pablano pepper, because I happened to have one, and it was going bad, and I also used 3 chipotle peppers that I had sitting around in adobe sauce.)

4 large Tortillas or your choice, I used organic mutli-grain tortillas about 10″ in diameter, cut 3 into quarters and one into 6ths. (use the quarters for the corners and fill in the gaps with two of the sixths per layer.)

3-4 c. Daiya cheese, cheddar or pepperjack, or a combination of flavors including mozzarella, which is what I did

3. Spread a thin layer of sauce to cover bottom of your prepared baking dish. Dip tortilla pieces in sauce and line the bottom of your dish with four quarters for the corners and 2 sixths for the middle.

5. Cover with foil and bake for 30 minutes. Uncover and bake an additional 10 minutes. (I broiled it for just a couple more minutes too.) Eat!

Result: It’s kinda messy when you serve it, but man, is it delicious! : ) 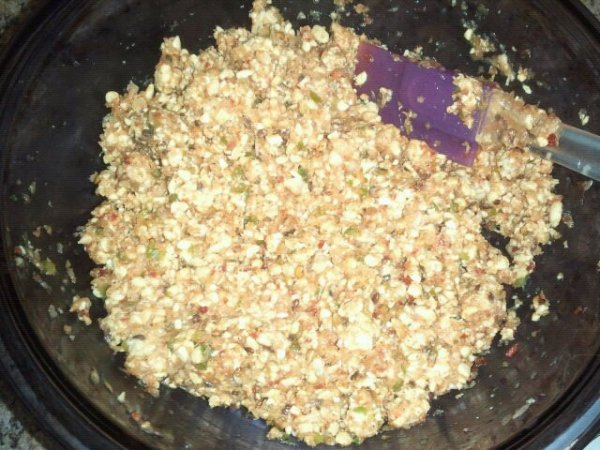 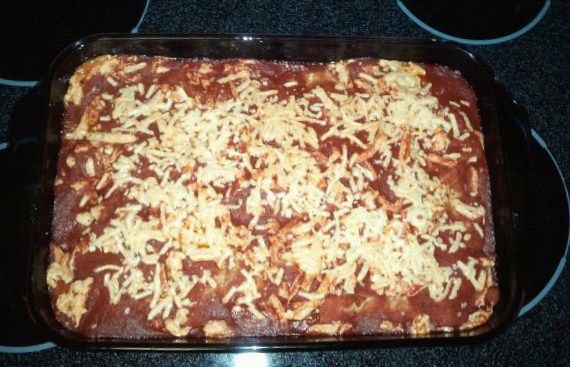 Tonight’s dinner is kicking off my recipe testing for The 30 Minute Vegan, a cookbook that I’ve had for months, and was meaning to get to. It has lots of raw dishes mixed in too, and I think initially this was a turn-off, but since I’ve decided that I want to be eating more raw, I pulled it back out. This, however, is not one of those dishes!

I liked the looks of this recipe, as it was getting late and we were hungry, and it seemed quick, easy, and required no stove top cooking. The assembly of these bad boys is where this went bad. Comparing the large bowl of filling to the small 8×8 pan didn’t leave me feeling confident, but trying to roll these corn tortillas proved to be an exercise in futility. They broke rather than rolled. It asks you to put a 1/2 cup of filling into each, and maybe it should be less (1/4)? So rather than get fed up, I improvised and ended up making a enchilada lasagna with torn up tortillas, filling, daiya cheddar and sauce in repeating layers. I made this in the toaster oven, so I covered it with aluminum foil for 13 of the 15 baking minutes for fear of burning it.

That’s the 1/2 c. measuring cup in there. You can see how much filling there was! 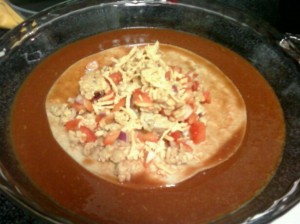 Too much to really get a good roll going.

After 2 broke, I started on the lasagna method.

As it turned out, it tasted pretty good! Another of my fears had been that it wouldn’t be cooked through, and of course, this recipe’s instructions weren’t written for enchilada lasagna, but it could have used a little more time for everything to be HOT. I ate it with some vegan sour cream and we both added lots of hot sauce for heat. It was really filling too!

And here is a picture of Boris. I may try to occasionally include pix of the kitties at the end of posts, since one, if not both of them are always hanging out in the kitchen whenever I’m cooking. : )

It’s no secret that my favorite food is mexican. One of the things I totally miss is ordering nachos. I’ve been meaning to make some, and finally got around to it last night since needed a quick dinner and had a big bag of TVP sitting on the counter from my shopping trip this week. The amount of cheese you add is up to you. If you put very little, the cheese will get crisped in the oven. (like real cheese) If you add a bunch, it’ll be nice and melty and gooey. (like real cheese!)

1. Turn broiler on. In a small saucepan, heat water, liquid smoke, worcestershire and seasoning to a boil. Remove from heat and add TVP.

YUMMMMMMMMM!!! I served these with a ramekin full of vegan sour cream. I use the Follow Your Heart brand. I know a lot of people rave about the Toffutti brand, but I think this tastes truer. It has the appropriate tang.