To be perfectly honest, I’ve been slacking so much on the blog that it’s almost impossible to know where to begin again! I have several, long, picture filled posts I could write, but it’s probably better that I just write about what’s on my mind today, and that’s where I’m at with roller derby.

(But first, I should probably multi-task, and get some bleach on my roots… Ok, bleach on…)

After feeling a little burnt out, and having little hiccups and travels, I’m finally starting to feel really motivated derby wise again. Which is great! 🙂  Getting on Rat Lab was a bit terrifying and overwhelming at first, and I really wasn’t sure if I was going to stay on. There are two levels of Rat Lab. The fundamentals (which I’m on) and Competitive Rat Lab, which just like it sounds means you scrimmage and bout, have a number of practices you commit to per week, and also become draft eligible for one of Rat City’s four home teams. Even though I wasn’t on CRL, the new pressures associated with skating with these much higher level players was something that took a little getting used to. But I’m happy to report that I’m staying on, and feeling more capable and motivated all the time!

Speaking of more capable… we had PFM scrimmage on Sunday. And while I jammed less than usual (partially b/c I wanted more practice blocking, and partly because my ankle was swollen from a wheel hit to the ankle bone a few days prior), for the first time I actually felt like I was doing some effective things as a blocker!

And even tried a little backwards blocking too!

Of course, I’m still learning. One of my struggles is endurance, but it’s definitely getting better. I think part of it has to do with sleep and hydration, which I’m perpetually trying to improve. But it’s no secret that I was never physically active as an adult prior this, besides dancing to bands on the weekends in my twenties, so a big part has been just getting myself in shape. Another factor that I think is playing a bigger part than I realize is the entirely foreign [to me] concept of mental game, which I haven’t quite figured out yet. For this, I just started reading Mind Gym, based on good reviews from rollergirls I know. I will report back on how that goes, but so far it seems to be about positive thinking, so that sounds pretty good for a start.

What else? I’m getting very close weight wise to the heaviest I ever got, which was the summer I gained 15 pounds before college. (Apparently I just couldn’t wait to pack on my freshman 15!) And you know what? I look pretty darn good. That weight has certainly been distributed differently this time around though, as it seems to all be in muscle in my lower body. And again, like before, I’m getting faster. Penny counted me at somewhere around 29 laps in 5 minutes last night. (It was hard to hear when exactly the time got called.) So those muscles are definitely doing what they’re supposed to.

Here’s a pic of me jamming the previous scrimmage, which I never got around to sharing!

Besides all that, I’ve also taken up the job of helping to coordinate the new skater sessions for PFM. So between PFM, Rat Lab, volunteering for Rat events, general summer activities, and life, I guess it’s probably no wonder why I’ve been a little quiet on here, huh?! I’ll be attending Jet City‘s Bombercon at the end of July, and most likely Rose City‘s Derby Daze boot camp down in Portland at the end of August, so don’t be surprised if a lot of my next posts are derby, derby, derby. 🙂

OH! And I also forgot to tell you, I had a slight name change to VAMPIRA BITELY! 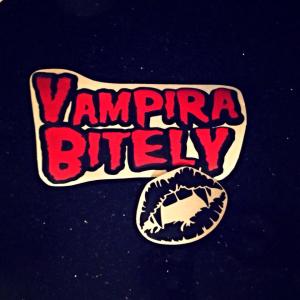 My new helmet decal is on it’s way from Helmet Candy (on etsy) in California as I write this to you, and she was even nice enough to make me some awesome fangs to boot!

OOOOOOOOOOOOOHHHHHHHHHHH YEAH, and also. THOMAS IS GOING TO DO MEN’S DERBY now! 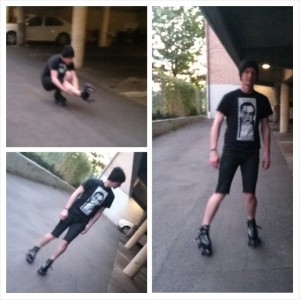 He was taken on for a salary position at his job, and has had health insurance now since July 1st! YAY!!!! He finally decided to get back on quads and give men’s derby a try, so I bought him a pair of Bont boots (same as mine!) that had to be made, because his size was out of stock. In the meantime one of the refs (and also a girl that I skate with’s hubby) was nice enough to lend Thomas his old pair. As expected, even after not being on quads since he was 8, Thomas immediately took to these with no problems and will likely be a much better derby player than I am on day 1! (He’s a skilled inline speed skater who learned how to rollerskate at the ripe old age of 2!) He’ll be starting training with Puget Sound Outcast Derby as soon as he gets all his gear, and we’ll now be practicing and watching each other skate in the same space, which is SUPER AWESOME. He may even go to BomberCon with me, as a skater. We shall see…