So, FYI, the top searched blog post on this entire site is my review of Candle Cafe, Candle 79’s more casual, and slightly less expensive sister restaurant. So I’m really pleased to finally get to tell you about Candle 79! It’s a really lovely, upscale all vegan restaurant located in the upper east side of Manhattan. I decided on it because of its super close proximity to the Metropolitan Museum of Art. (Candle Cafe is just a little further south.) I originally planned on having brunch, but once I got there, found the lunch menu more tempting.

Upon arriving, they asked if I had reservations, (nope!) but it wasn’t a problem. It was about 2pm on Sunday, and it was just slowing down from the brunch crowd.  I was seated upstairs and enjoyed the quiet & luxe ambiance of the purple velveted walls and gold leafed mirrors.

Everything sounded delicious, so it took a little while to make selections. I ordered a really delicious ginger tisane tea to drink while tending to my arduous task, ; ) It came as a loose tea steeped in a personal size teapot. The server also brought some wonderful banana mini muffins to nibble on.

After a tough decision on appetizers, I ordered the chimichurri seitan. I’d had it at the Cafe before, and it was amazing, so I had pretty high expectations. It did not disappoint! The texture of the seitan was perfect and it was SO delicious. It had all of that wonderful smokiness that I remembered with the fantastic flavors of the chimichurri and 79’s extra sauces. 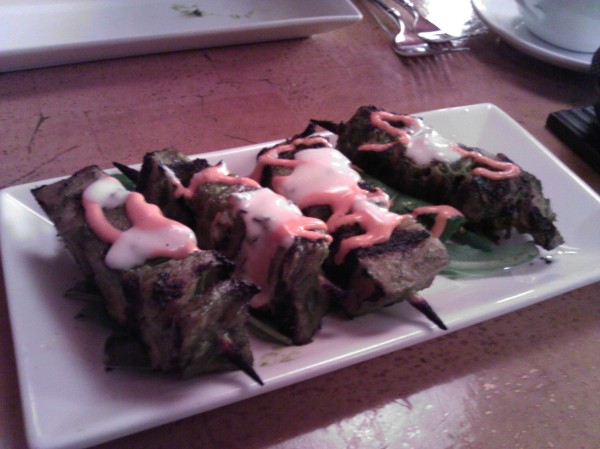 Deciding on lunches was an equally difficult task. 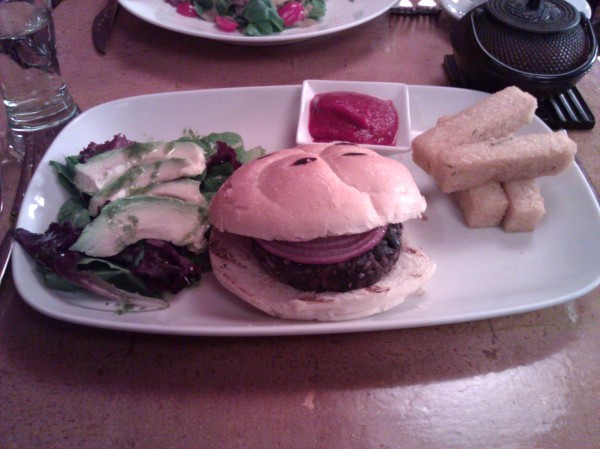 This was really, really good. Especially the more you got into the burger and past the oversized bun! There were caramelized red onions that made every bite incredibly tasty, and the polenta fries were so satisfying. It was like eating savory fried cornbread. The chipotle in the ketchup was not easily discernible.

My salad was spectacular, albeit a little small. The waitress said it was really meant to be a starter salad more than an entrée salad, which makes you wonder at the $16 lunch price. For $4 more you can get tofu or tempeh added to a salad to make it more substantial, though because we had the seitan first, I ended up getting quite filled up. It had a wonderful variety of different tastes and textures, and the dressing was delicious!

I was pretty stuffed after this, but wanted to try dessert. The MEXICAN  CHOCOLATE  BROWNIE with caramelized bananas, vanilla mole ice cream, toasted pecans, chocolate-ancho sauce  $12, sounded awesome, but I was just too full, so I ordered the HOUSE MADE ICE CREAM & SORBET SAMPLER chef’s daily selection $9, instead. 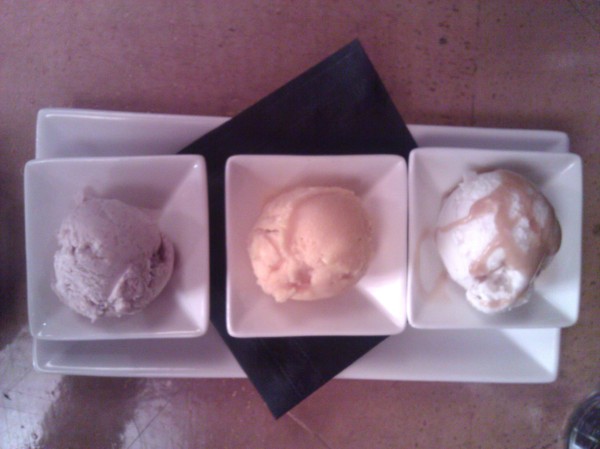 From Left to right: Peanut Butter ice cream, I can’t remember what the sorbet selection was, and Dulce de Leche ice cream. The peanut butter was absolutely the winner! It tasted less like peanut butter and more like vanilla ice cream infused with fresh roasted peanuts. Superb! The sorbet was super sour and mouth puckering, and quite a contrast to the super sweet and creamy Dulce de Leche.

If you have the opportunity to go to either Candle 79 or Candle Cafe I highly suggest you do so! The food is just amazing, the service is excellent and they have either 79 if you want a more upscale dining experience or the Cafe if you’re feeling a little more laid back. I think it would be difficult to order something bad at either location, and they have plenty raw and gluten-free options too!

Candle 79 is located at 154 East 79th Street at Lexington Avenue, New York, NY, is open M-F for lunch and dinner and Sat & Sun for brunch, and take both credit cards and reservations.

i went to angelica kitchen once while i was living in new york, and was so pleased to be able to return. it’s a macrobiotic restaurant near union square and they have a good variety of appetizers, soups, salads, entrees, baked goods and desserts, as well as daily specials.

we started with the  Curried Cashew Spread ($4.75) An intriguing live blend of raw cashews, sprouted chickpeas, freshly ground curry powder & unpasteurized miso. Accompanied by crisp crudités. this was really good, and i’d like to try to recreate it at home.

despite my trying to order something different this time, i couldn’t resist ordering what i had back in february… the Sam or I Sandwich Herbed baked tofu layered with marinated hiziki & arame, crisp grated daikon, ruby kraut, a smear of mellow sesame spread & lettuce. Served on choice of mixed grain or spelt bread. ($8.75) or get Half a sandwich with simple salad or cup of soup & kukicha tea. ($9.50) i highly recommend this sandwich : ) 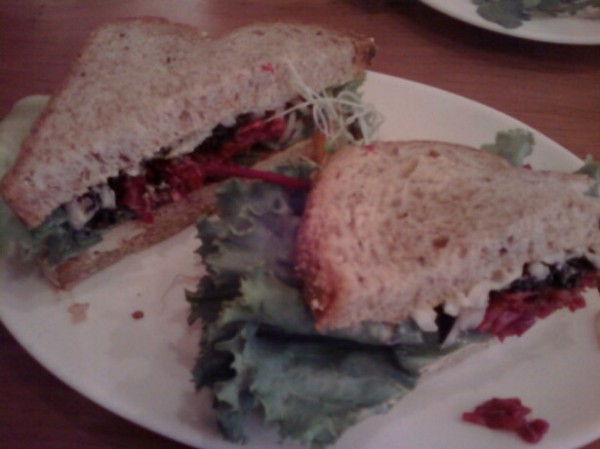 we also ordered a peach cobbler pie, not pictured, but it wasn’t all that great. overall it just lacked flavor.

my neighbor kassidy had been dying to take me to wild ginger, and finally friday i was able to meet up for a delicious “pan asian vegan” meal, and some pinot noir (actually, a lot.) we had a really lovely dinner. just one complaint… but i’ll get to that after the food!

Pan-fried vegetable dumplings: these were really yum & so was the dipping sauce. 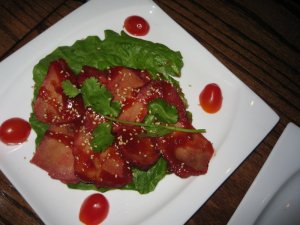 B-B-Q ribs: awesome! i had my eye on this item right away, and it tasted like christmas.

Scallion pancakes with home-made mango salsa. greasy, but incredibly good. the salsa helped freshen it up.

Miso soup: kassidy’s pre-dinner soup. she seemed to enjoy it. 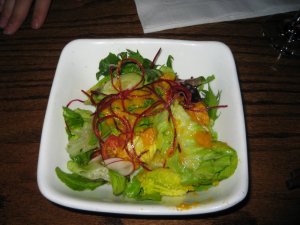 Sweet citrus soy protein: kassidy’s dish. super savory, and beefy like, over a bed of delicious kale and almonds.  it was very, very good. the brown rice that it came with had pine nuts mixed in. 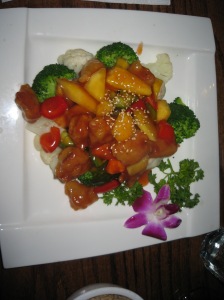 Sweet & sour soy protein: i LOVED my dish. i used to love sweet & sour chicken, and this had the exact light batter coating of the original. SO, so, so delicious! really, i’m sad i will not get to eat this dish again. or at least for a long while.

Dessert: by dessert we were so full on food and wine! we didn’t even finish, a shame. 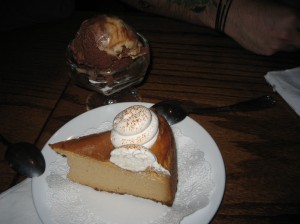 Pumpkin cheesecake: creamy, but with a little sour aftertaste. i thought it could’ve been more pumpkin-y.

the food was excellent, dessert ok, and the service was fine… that is until the waiter stood behind kassidy until we were done with the check.

VERY RUDE about hovering over you as soon as the check hits the table. he even went so far as to count out the tip as soon as we handed it to him, in front of us, and show it to the other server for approval! i don’t know if they have trouble with the hipster crowd, and are therefore suspicious, or what. regardless, it’s an off-putting ending to an otherwise wonderful meal. apparently this is something you can count on happening at this establishment. kassidy said this has happened every time she has dined there, and she has even witnessed them reprimanding a guest. she has sworn to not come back in the past, but the food is just too delicious.

final thoughts: well-priced, yummy food with serving sizes that are generous without being overwhelming. they take credit cards too.

After checking out many different, pricey restaurants, I settled on candle cafe for tonight’s dinner. Candle Cafe is by the same owners as Candle 79, only slightly less expensive, and more casual and with a similar menu.

We got there about 7:30pm and our wait was 30-45 minutes, which I think is pretty reasonable for a Saturday night, anywhere. It’s a fairly small place, so it’s understandable.

We were able to grab a stool at the bar, and the bartender was friendly, and let us know we could also dine there, but we wanted to wait for a table. The bar had wine, beer and juices. J ordered a beer while we waited. After a while, we also ordered some focaccia bread, and sure enough, our table opened right as the bread arrived.

SCARECROW GOLDEN PALE ALE – (England) Creamy balance of malt and hops. it was tasty and light, and came in a 17 oz bottle for $9, which I thought was well priced for the size.

We got the garlic olive oil and honestly, focaccia it wasn’t, but it was delicious. What it reminded me of was the freshly grilled garlic bread you get at a cuban restaurant. OK, it was just like that, except on what looked like a ciabatta roll. 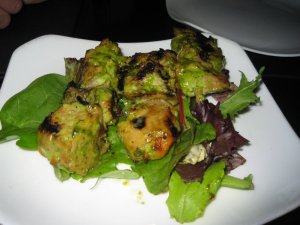 These were incredible, and honestly the thing the I wanted to try most on the menu. Being that they were cooked on a grill, they had a wonderful smoky, meaty flavor. The chimichurri sauce was SO delicious. I could have a meal centered around this offering very happily.

Fantastic! I was very insistent on ordering this, and we were both really glad that we did. The marinated chickpeas were delicious, and so was the vinaigrette. The tofu didn’t taste like feta, but gave you the texture of it, still, yum! We only wished that the olives were pitted, to make eating them a little more elegant, but regardless, we polished off the whole thing!

I had a hard time deciding what to order, but I kept coming back to this one. Once I found out that the gravy didn’t have mushrooms, I was sure. It arrived a bit lukewarm, but the gravy was scalding hot, so after pouring it over top, it balanced out. It was served on a bed of tasty sautéed kale, which was also still hot. This was great! I wanted to eat the whole thing, but got full. So I have some leftovers for later : )

It was okay, not terrible, but not terrific. The tofu ricotta still tasted pretty bland. It also came on a bed of delicious kale.

We also got an order of fries (not pictured), which we shared. Nothing out of the ordinary here. The ketchup was awesome, apparently Muir Glen brand, according to our server.

I’m not sure if they used brown rice or white, but this rice pudding was shockingly good! It came dusted with cinnamon, but the best part was the surprising very vanilla-y after taste. Clearly they use real vanilla bean in their pudding, as it was flecked with beans. It was great in conjunction with the vegan cappuccino.

Some of that night’s specials that also looked good [on other people’s plates] were: the taco salad (huge!), which I wanted but was trying to not order mexican food [for a change], and the fettuccine, which had mushrooms (i don’t eat mushrooms) but also lots of other yummies like capers.

The service was excellent, and all of the staff was friendly, helpful, and courteous. I would definitely return.