Well, I know I’ve been absent for quite a long time. The longest since I’ve started the blog, I’m pretty sure. Thomas had a 7 week work trip down in Long Beach, and we also went home to FL for Thanksgiving, so we were out of town a lot in the last two months. Which brings me to a little detail that I should probably throw in…

We got engaged! The day before our 4 year anniversary in October. And we’re getting married next October. 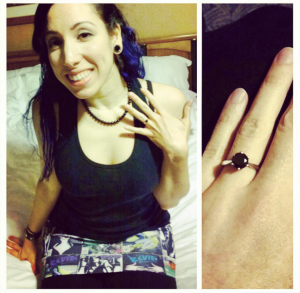 Now onto what has definitely become my favorite nail polish brand! (And, well, there’s another ring shot too.) 🙂

I picked this red glitter (Arianna) Zoya polish on a visit to Vegan Haven right before our trip home last month. This was my first time trying one of the Pixie Dust colors, which leaves a matte glittery finish. It literally looks like real glitter on your fingers, instead of glitter polish. Let me try to get a better picture…

Detail (sorry, I’m not known for my polishing skills!)

I wasn’t sure about how I’d like the texture when I bought it, but ended up liking it, and I thought it was fun and festive in red for the upcoming holidays. It lasted almost a week during our trip, which was about what I expected based on previous experiences. Last year was my 1st time using their polish, and I tried Storm (black shiny glitter polish) and was shocked that it lasted a week without chipping, and I even worked in it! I’m normally the type of person who starts chipping the next day. I’m curious to see how the pixie dust will stand up to the rest of my skating and work week, and will report back with more.

The best thing about this polish, besides the long wear and nearly infinite amount of colors and finishes available, is the super high quality of the polish. (It also has a super comfy rubberized cap/handle!) Zoya is not only Vegan, but also free of toluene, camphor, formaldehyde, formaldehyde resin and DBP (dibutyl phthalate). One, or any combination of those nasty ingredients had clearly been an issue for my nails in the past, because whenever I had my nails painted with let’s say OPI, it ALWAYS caused tremendous damage to my nails after. They would always start to peel and get brittle, even after just one polishing. That combined with always working a lot with my hands, and for most of the last 10 years of being in the medical field = a lot of hand hygeine, I had pretty much given up fingernail polishing entirely.

Zoya also runs a lot of nice, affordable specials too. The regular sized 0.5 oz bottles go for $9 or $10 each, and mini sized 0.25 oz for $5, when available, which is not terrible. But they often have specials going on which is how I got my initial 3. It was a get 3 polishes for the price of shipping deal that they do once or twice a year, and today I was able to get in on a good one for an 8 oz bottle of remover and 3 polishes with free shipping, for $20!

So I’d highly recommend to follow them on some social media to get some good deals and check them out. I think they do that 3 free polishes deal around the beginning of the year too. Here is their facebook, twitter, pinterest and instagram!