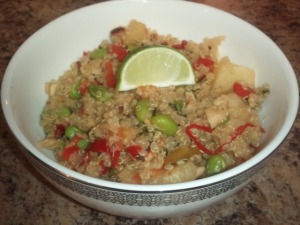 Flipping through the Veganomicon, this recipe caught my eye. It’s full of things I love… pineapple, cashews, garlic, ginger…mmm! It wasn’t until I read this post though, that I actually went out and bought what I needed. I thought the canned pineapple substitution worked great. It gives you just the right of juice needed to cook the quinoa, and the pineapple is already prepped for you! : )

I cooked the quinoa & edamame a couple days in advance, when I had the time. Per Isa’s recommendation, I prepped all the ingredients first. (Which is what I used to do when I first started cooking so I could focus on the cooking part & not burn things!) So everything was ready to go, and it goes pretty quickly.

I used about 1.5 tbsp of peanut oil instead of the 3 called for.

I didn’t have to cook the last addition [of quinoa and pineaple] quite as long as the recipe called for before it was piping hot and ready, about 8 or 10 minutes.

I was a good girl and did what I was told for once, and even garnished it with lime wedges as she suggested!

This was a very satisfying dish. Lots of flavors and the squeeze of lime on top was nice too. Oh, and as is usual for most cookbooks, this 4 serving dish ended being about 3 big ones. 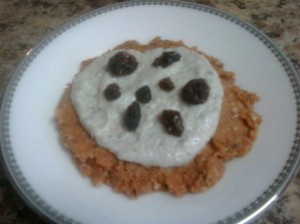 After making their delicious apple pie, I was curious to try the carrot cake recipe. The “crust” is a blend of carrots, apple, almonds, dates, cinnamon and nutmeg. It also calls for lemon zest, but I subbed a capful of lemon juice instead. 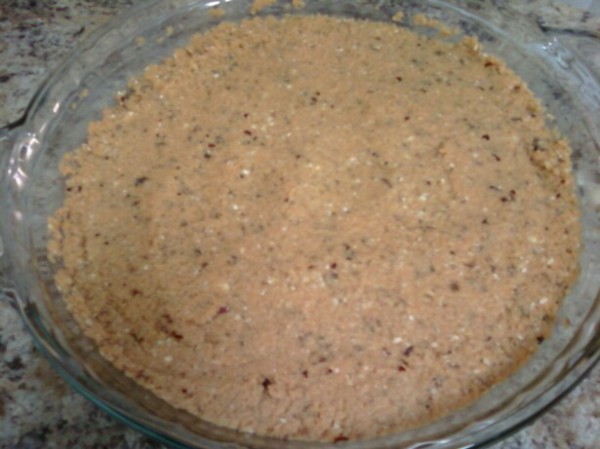 I spread the carrot mixture out onto a pie plate as suggested, but since this wasn’t a firm crust, like the apple pie one had been, I figured it wasn’t going to cut and serve well. So I transferred it all to a container and figured I’d just make the individual servings as needed.

The pear cashew cream called for a very ripe, large pear, and I found this very nice, BIG asian pear at WF. 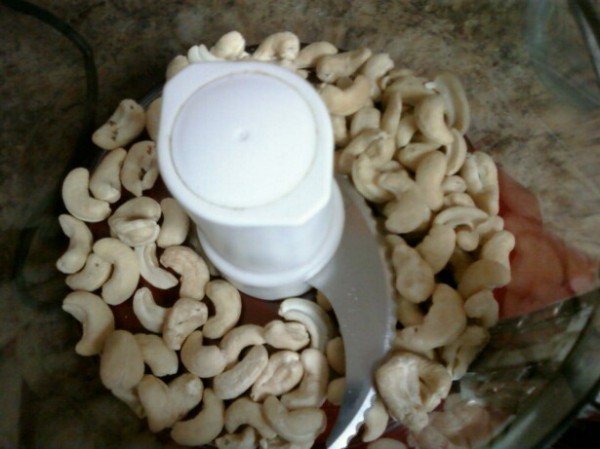 cashews, pear, water, agave and vanilla extract in place of the vanilla power/paste.

The directions tell you to keep the cream separate, and top the “cake” when serving. It also says you can freeze this to make a frozen dessert. It made quite a bit, so I may do this if there is any leftover. I also added about a teaspoon of raw agave for a little extra sweetness. 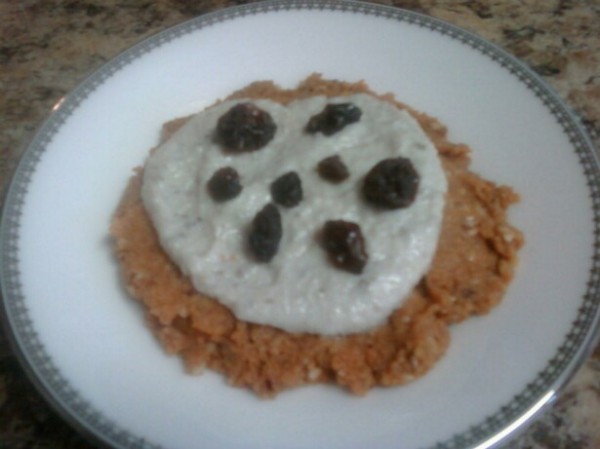 To serve I topped it with cream and sprinkled on some raisins. It was really fresh and delicious. It still feels a little naughty because of the cashew cream, but you don’t have to feel too guilty. ; )