So I’ve been WAY behind in telling you about my favorite places to eat thus far in Seattle! I’ve just been letting the pictures pile up in my phone. So thank you MoFo, for giving me the kick in the pants I needed. But before we get to that, I’m going to tell you more about our Sunday afternoon… Well, we drove out to Snoqualmie Falls.

What?! You never heard of Snoqualmie Falls? That’s probably because you know the town of Snoqualmie a whole lot better as the fictional town of Twin Peaks.

That’s Snoquamie Falls right there at the 1:42 mark of the intro! 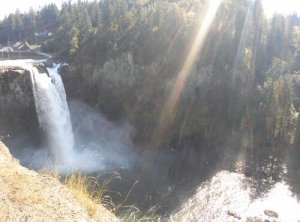 Twin Peaks love has never died amongst the spooky, David Lynch loving set, but especially in Seattle. We’ve seen more than one framed portrait of Laura Palmer right over a bar, and there’s the 2nd Twin Peaks party in 2 months coming up around the corner.

Thomas also made a point to take us to the actual diner used for the Double R. (You can read about the history of the diner here.) Unfortunately, a fire in 2000 was cause for a gutting and a remodel, but that doesn’t keep them from keeping the tourism alive and wrapped in plastic. 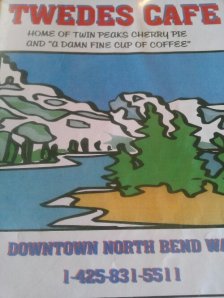 Everything in Twedes was indeed wrapped in plastic, but I’m not sure that was intentional. 😉

So needless to say, the cherry pie wasn’t vegan. But Thomas is vegetarian (even though he’s about 95% vegan, in diet, clothing, etc.) so he went right ahead and ordered the requisite pie and black coffee. The coffee WAS good, though I just had a small sip, since I haven’t drank coffee in years! But all this diner ambiance was making me want some vegan diner food of my own. So we agreed to drive straight to Wayward right after.

Since our favorite vegan bar, Highline closed their all vegan kitchen recently, we’ve been driving up to the University District a lot more to get our greasy vegan fix. And although Wayward isn’t a bar, they did start doing beer, wine, and on tap mimosas (no cider yet) right before Highline closed, but we still have Vegetarian/Vegan bar Georgetown Liquor Company down in Georgetown.

And now for the food… 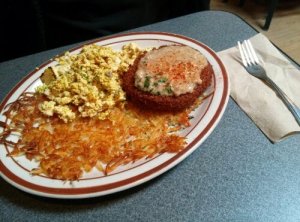 House made meatballs with fried cheese wedges and a mayo slathered, toasted hoagie roll. This thing was a beast! A delicious, yummy beast.

Mac Daddy is a $12 double decker burger that took me two days to eat. But it really hit the spot. Twice.

Bikini Bowl $8 off the gluten-free menu was incredible and has kale, quinoa, tempeh, & tahini dressing

The Wizard $9 has definitely become Thomas’ go to sandwich. He doesn’t even look at the menu anymore. He gets his with fries. That broccoli slaw was mine 🙂

The best part about Wayward Vegan Cafe? We’ve never had anything bad there! The food is always delicious, and as you can see by the Bikini Bowl pictured above, they do even have some healthier options. They have a good range of gluten-free items that cover Breakfast, Lunch and Dinner, and the only thing they don’t serve all day is the Dinner items, which are just from 4-9pm.

Not only that but it’s on the same block as Vegan Haven (all vegan grocery store), Araya’s Place (Vegan Thai restaurant) and just on the next block  and directly across the street from Vegan Haven is Pizza Pi (Vegan Pizzeria).