I’ve been doing the amazon vine program for several years now, but have kind of been slacking for some time. It’s a program where they give their top reviewers (All of those reviews I wrote about kitchen utensils and cookbooks eventually paid off!) the chance to try products for free, as trade for reviewing them. It’s actually a big part of the reason I went vegan, if you want to know the truth. Some of the first selections I made were Alicia Silverstone’s The Kind Diet and Why We Love Dogs, Eat Pigs, and Wear Cows (which btw, was so graphic, I couldn’t even finish, and am still haunted by) back when I was thinking about going vegetarian again. I ended up going vegan instead, and staying vegan as a result!

The offerings are usually very book heavy, but I hadn’t seen a cookbook I was interested in for a long time. When I saw a vegetarian book, I got excited and figured I could veganize the recipes easily, and could use a kick in the butt to get cooking again.

Since I left my giant kitchen a year ago, and moved into smaller apartments in Fort Lauderdale and Seattle, my previous zest for cooking had diminished proportionately with my diminished counter space. Sure it’s not as bad as cooking in that tiny studio in Brooklyn, but it’s less than ideal. Unfortunately, that’s just city life, no matter what city you’re in, or at least it is in my price range!

Now onto the book…

Turns out more peas, thank you is already a vegan cookbook, with no help from me. Sure she does offer the organic, ovo-lacto vegetarian option as well, but they’re written vegan first. I was so excited about my good luck! It also turns out that this book is a sequel to her peas, and thank you volume, and that she writes a blog over at peasandthankyou.com, if you want to check out some of her recipes and writing style.

I started out by reading the entire book back to front (I also read magazines in this fashion) and dog earring all of the things that sounded good, whilst reading out titles to Thomas. Happily, I dog eared most of the book. The recipes sounded good, and were generally not too fussy, which I appreciate these days. I attribute that to her whole mother of two craziness thing that she writes about so often in her intros. I will also say this, I’m so used to anecdotes from the friends that I have that now have kids, that even this was okay. It’s most of the book, but at least it’s usually humorous, and sometimes even a little snarky!

The Tempeh Stroganoff was the first recipe I made, by Thomas’ request… 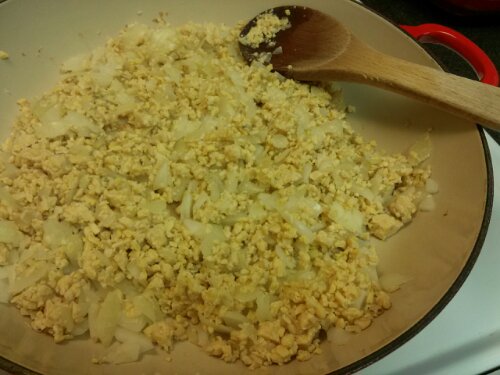 I chose to chop the onions in the food processor, because for some reason I really can’t stand chopping onions anymore. I end up burning and crying so much that I have to leave the kitchen and flush my eyes out with water repeatedly. (Though I think these bagged onions I bought from WF twice now are especially bad!) That being said, I chose to pulse the tempeh into crumbles in there as well instead of grating it as called for in the recipe. I highly recommend doing both of these things for convenience & as a time saver. Besides that, I followed the recipe exactly.

Easy, filling, delicious! I had never had Beef Stroganoff before, so I didn’t have much to compare to, but Thomas said it was pretty similar. I thought it was great, and had the pleasure of eating the leftovers for lunch the next day. The depth of flavor she achieved in this fairly simple meal left me excited and motivated to keep on cooking from her book. Expect to see more reviews of her recipes in the coming days. 🙂