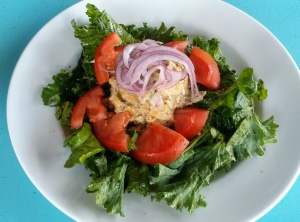 Day 4 of our road trip was the day before Thanksgiving. We were happy we were getting to spend the entire day in Austin, because we were now going to spend actual Thanksgiving day driving through the rest of Texas, instead of LA as we had originally planned. So I sought out what I thought would be a sure thing, so we could go pig out properly in one of Austin’s fully vegan establishments. 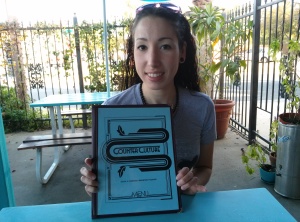 And that sure thing was Counter Culture. Originally, I had hoped to eat there the night before, but by the time we got into town and checked in at the hotel, it ended up being far too late, so we hit the bricks to seek it out the next day for lunch! The weather was super nice out, so we sat outside. 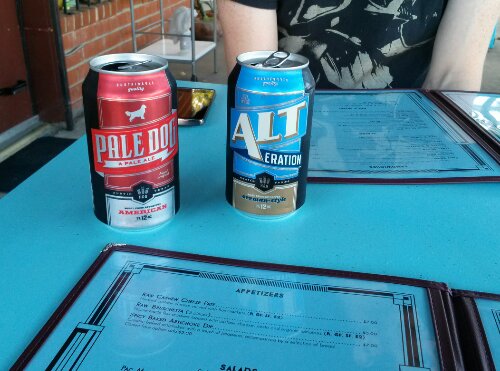 We got there during happy hour, and started out with a couple of really tasty local brews from Hops & Grain: A sustainable brewery in Austin. They had two selections which just so happened to fit our beer palettes perfectly.

An ALT-ERATION – a blended base of German Pilsner malt with hefty portions of Munich, Vienna and just a touch of de-bittered black malt, for Thomas.

And a PALE DOG – an American Pale Ale. A blend of Vienna and Caramel malts with a sweetness of grapefruit and tropical fruit, for me. $4 each. 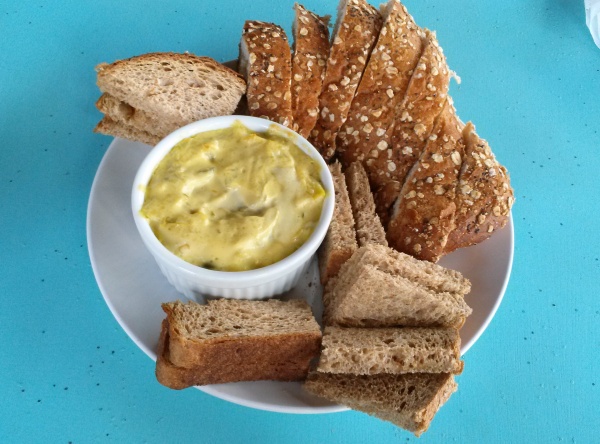 We ordered a SPICY BAKED ARTICHOKE DIP – Creamy baked artichokes with a touch of jalapeño, accompanied by a selection of bread, $7 which you can also get Gluten free for an extra $2. Really delicious, and so much bread. We ate all of it. 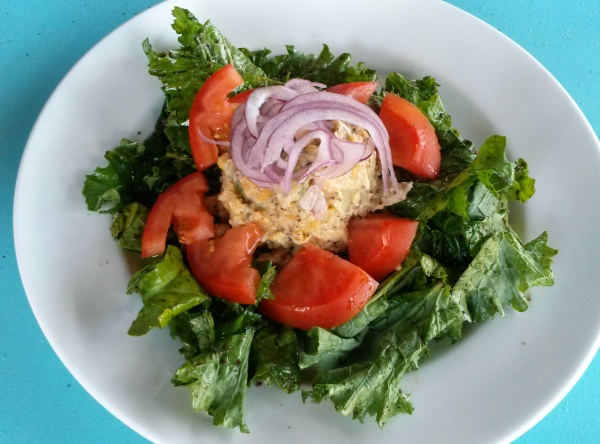 We also ordered a GARBANZO “TUNA” SALAD to split, since we were really hungry and had trouble deciding on our entrees. A scoop of garbanzo salad centered on a bed of mixed greens, tomatoes & thin red onions with vinaigrette dressing, Gluten-Free, $7. I ordered it over kale, though! 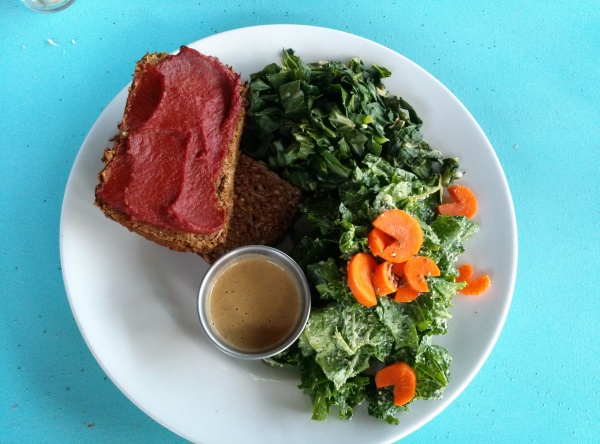 I ordered the LENTIL LOAF – Herbed lentils & vegetables topped with house-made ketchup and served with a side of tahini mustard sauce, Gluten-Free, $12. I ordered it with GARLICKY GREENS and PAC MAN kale salad. Look at those little carrots cut to look like pac man! So cute. I really can’t pass up a lentil loaf if I see one. This one tasted really good, but the texture could have been better. It was kind of dry on the outside and dense on the inside. We figured it might have been because it was gluten free. The tahini mustard was terrific on the garlicky greens, and well, more kale for me. I was happy and stuffed. Didn’t get quite through the loaf. 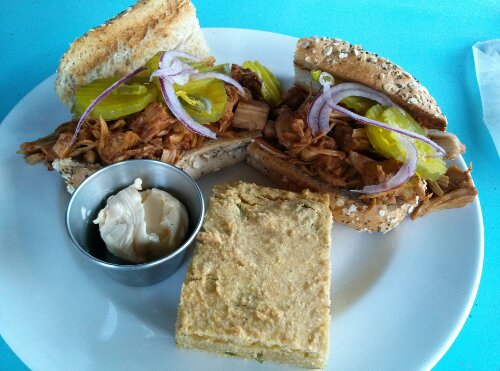 The same way that I’m a sucker for a lentil loaf, Thomas is a sucker for vegan pulled pork. He got the JACKFRUIT BBQ sandwich. Shredded jackfruit covered in organic chipotle bbq sauce, topped with onions & pickles. (There’s a GF option for this too.) $8. It got a superior rating from him of being “Really Good”. I tasted it too. It was. 🙂 He got it with a side of cornbread which wasn’t sweet enough for either of us. There are two kinds of cornbread in the world, and we are of the cakey, sweet cornbread loving school. This is from the other one. Still, it’s cornbread. It’s still good. 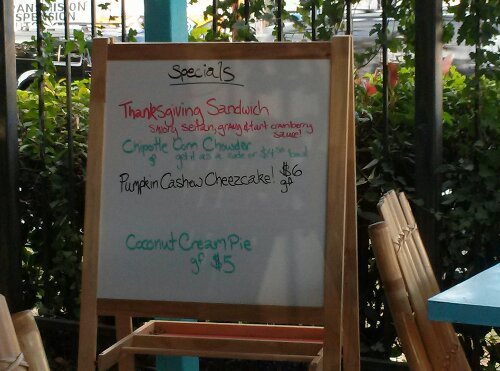 Before leaving, we packed up two Thanksgiving sandwiches for our day of driving ahead. I really wish we had packed up some of the pumpkin cheesecake too, but Thomas is allergic to cashews (we think) so I decided against it.

Later that night, we headed back out down 6th street to enjoy our last night in Austin, and decided to check out Easy Tiger, a Bake Shop and Beer Garden. They have a lot of good beer on tap, and it’s a really cool location. The store front on the street level just looks like a counter for a bakery. If you go down stairs, there’s a full bar and restaurant area including shelves of board games, a huge out door area that includes covered tables, and also a wide open area that has several ping pong tables. 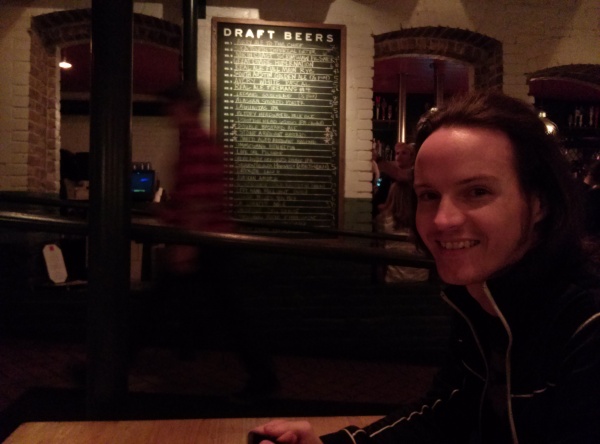 When I asked the waitress about their Dog Fish Head 60 Minute IPA (my fave!), because it said (Randall) next to it, and she told me what the Randall was. (The brown wine bottle looking thing in the pic below with the Dog Fish Head sticker on it!) 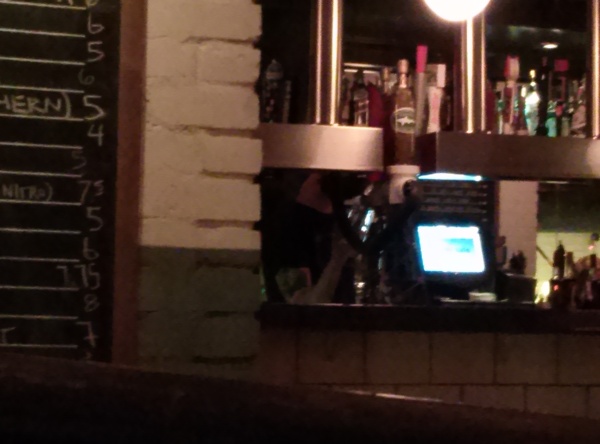 It’s one of only 4 in existence, and it’s a device Dog Fish Head came up with to run beer through it to give it extra hoppy taste. I decided to give it a try…  Honestly, the taste wasn’t much different, but it did make the beer kind of warm! Their other beers were nice and cold, though! 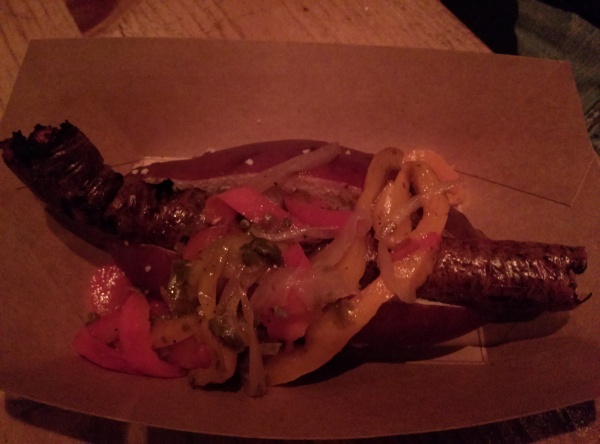 I was still full, but Thomas was a bit hungry, so he ordered the Vegetarian version of their house made sausages. It’s actually vegan and consists of Beets, Lentils, Brown Rice, Flax Seeds, Pumpkin Seeds, Herbs, and Smoke, and comes served with Sautéed Pickled Peppers. You can get just the link $5, or on a pretzel bun for $7, but the pretzel bun isn’t vegan.

Okay, it’s way better than it looks! After trying it, I ended up ordering a link for myself. Extremely tasty! As we left I asked if any of the breads were vegan in the bakery upstairs, and the girl told me the only one they had at the moment was the 9 grain bread, so we took a loaf to go for the road. (Literally!)

Thanks for reading, and stay tuned for the details of the rest of our trip!