So my road trip pictures begin with Day 3 (Tuesday before Thanksgiving), due to my phone smashing to its death in New Orleans, but I’ll give you the run down on days 1 and 2. It was mostly just driving. We decided to only travel up to Winter Haven on the Sunday we began, in order to give us a better jump on getting to NOLA the next day at a reasonable time, and also so that we could do one more quick visit with Thomas’ mom and sis.

We only spent the night in New Orleans. Our car was so weighed down with stuff that it was scraping against the bumpy roads of the city, so we made a quick exit the next morning, but we decided to take an extra day in Austin since we were getting in late, and it has such an awesome reputation.

We stayed close to the fantastic 6th street bars, and took a long walk down to Cheer up Charlie’s (I like the Willy Wonka reference, but everyone knows to fast forward that song in the movie, right?), where they have 2! vegan food trailers (One was Arlo’s) parked on the premises. Unfortunately for us, they had just closed when we got there (contrary to what it said on happy cow!) So we had a beer and hung out for a little while. Now it was getting late and we were very much in need of a 24 hour diner of some sort. We overheard mixed reviews about heading to Magnolia Cafe from a nearby table, and decided to just go with that. The cab ride was kinda pricey, but at least he agreed to come back out there to pick us up, as there weren’t any cabs patrolling that neighborhood at that hour.

Guess what? Magnolia Cafe is not vegan friendly! But if you read the happycow reviews, it kinda says it all there. Our waiter had no idea what vegan meant at all, so I was kinda bummed I had to do this awkward waltz of food interrogation (I hate to be that person), in Austin of all places! But I did get fed, and that was the most important thing at that moment. However, he was proud to tell us that their [not vegan] pancakes were featured on the Food Network’s Diners, Drive-ins and Dives, so there’s that. Also, the table cloth was pretty darn cute. 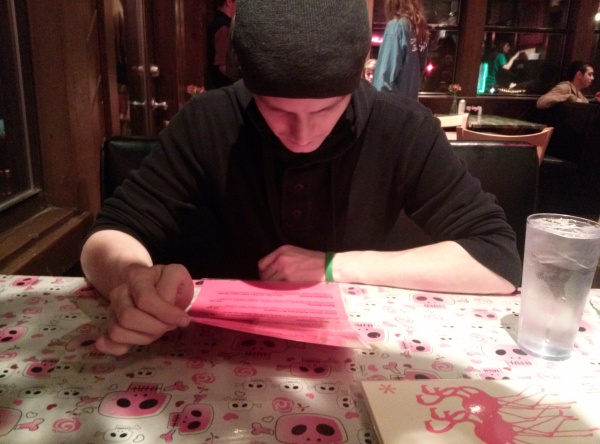 Thomas is vegetarian, so had a much easier go of it. He did not get the pancakes either. Also, flamingos. 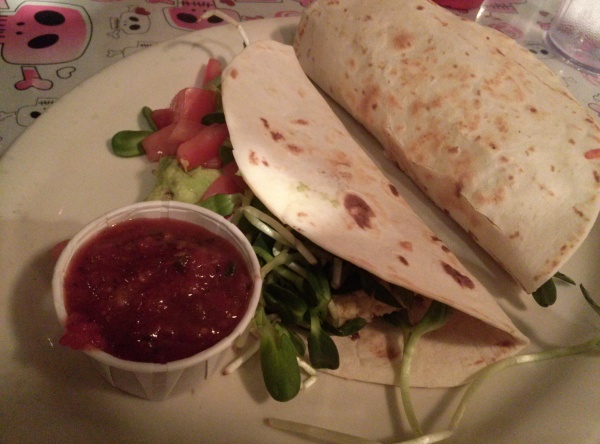 So I got some hummus tacos with sprouts, avocado, and tomato served with salsa. He said the tortillas didn’t have lard. I believed him. I was happy to have food in my tummy. And hey, it was fresh!

If you need late night food, maybe you should try The Vegan Yacht. I had debated that one too, but didn’t want to get fooled again in case they weren’t actually open until 2am on a Tuesday before Thanksgiving. Sounds pretty yum, and their motto is “SAFE, HEALTHY, FRESH VEGAN DISHES THAT ANYONE CAN ENJOY. CLOSE YOUR EYES, POINT, THEN ORDER. IT WILL BE TASTY.” Sounds good to me.

Also check out one of Vegan Lazy Smurf’s food guides for Austin for more info if you’re traveling there. Very extensive research! 😀

Stay tuned for the rest of our road trip posts. Though I may continue to slip in some concise current updates too!