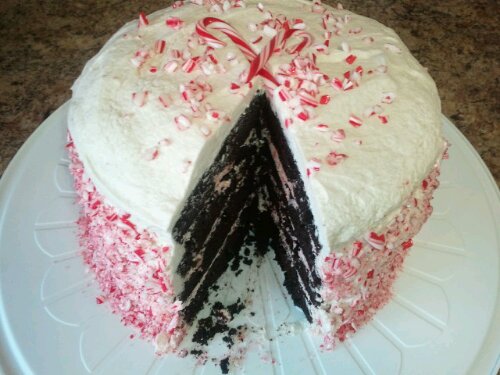 Several things happened when I got this month’s Williams-Sonoma catalog. I fell in love with all the gadgets and gizmos that I WON’T be buying before our move to Seattle, as usual. I made a mental list of all the things I WILL be buying when we get to Seattle, kitchen space providing. Then I got to the food pages. Sure, the first part is mainly meat items. Flip, flip, flip. (Though the mini beef wellingtons just made me crave the pastry encased Field Roast!) Then I got to the sweets & treats. Now I’m not normally a sweets person, but this really got to me. Gingerbread men coated in dark chocolate and sandwiching marshmallows, PEPPERMINT BARK! and this cake. A $100 peppermint crunch cake that I just HAD to make. (I really wanted to make peppermint bark too, but having to special order vegan white chocolate chips turned me off to the idea.) 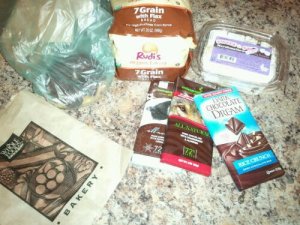 Also… the resolve to make my own version of said cake. I decided to go with what I know. So I pulled out my copy of Vegan Cupcakes Take Over the World. I used the basic chocolate cupcake recipe and Hershey’s Special Dark cocoa, only with 1 tsp of vanilla extract and 1 of mint extract. I used 1 recipe for each 9″ cake pan, and they were baked in 25 minutes, 2 at a time. I would love to tell you that I baked all 4 at one time or in advance, but that’s not really how it went. For some reason I thought this was going to give me a thick enough layer to halve, but I was wrong. I baked the first two the night before, and then the other two after assembling the first two layers!

I also used the basic buttercream for both of my frostings, again using 1 tsp. of vanilla extract & 1 tsp. of mint, and adding 1/2 c. of crushed candy canes for the peppermint crunch frosting. For the outer smooth peppermint frosting I added probably close to 4 tsp. of mint extract, and it was still fairly subtle. 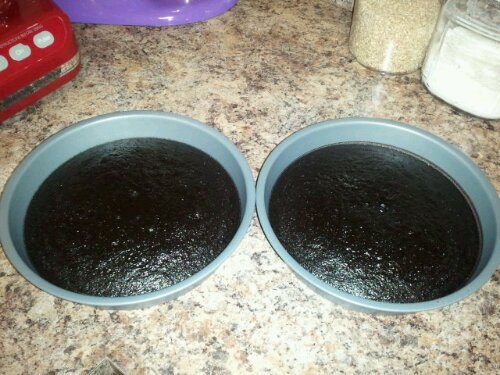 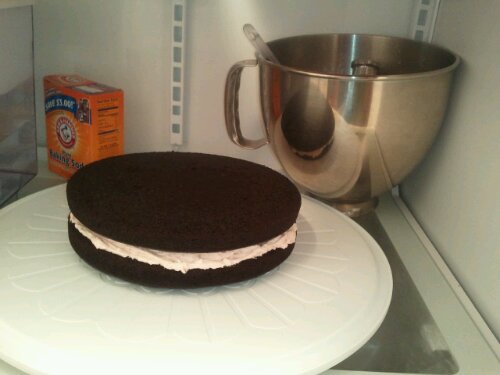 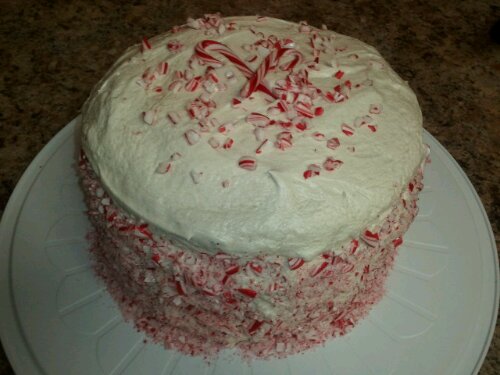 I also went by BB&B today with one of those 20% coupons and got myself the BIGGEST cake dome/carrier of all time. (It has trays to also tote 2 dozen cupcakes wherever you please.) As I neared the registers I got sucked in to the Christmas section and picked up some pre-lit garland. We didn’t feel like fussing with a whole tree this year, and Thomas came up with a marvelous substitute! (Pic below!) 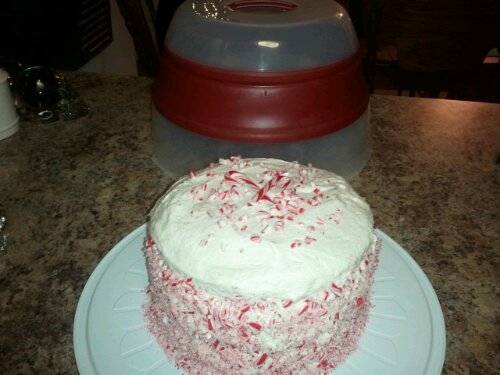 Results: According to Thomas it’s really awesome. : ) I think it’s pretty good. It slices really well, and holds all the layers from cake to plate, no problem. The only adjustment I would make is to do a little less crushed peppermints in the layer frosting, or just peppermint extract and leave the pulverized candy canes for the outer decoration.

The only other time I made a layer cake was for Thomas’ birthday back in September, and it only had two layers, so I was pretty satisfied with how this came out. It did have an ugly side, but the peppermint crunchies on the side helped to conceal it. I’m thinking an AMAZING variation would be a mocha cookies ‘n’ cream number using this recipe as a guideline.