I will start out by saying that I tried to get the scoop on Vegas vegan eats a full week and a half before my trip. @LJPendizzle was super helpful and gave me many insights, including checking out Red Velvet Cafe, which I unfortunately missed. I also came across quarrygirl.com‘s many entries on Vegas food which led me to be the last person to find out [even my mom knew!] that Steve Wynn of the Wynn resort hotels went vegan a while back and made all of the resort restaurants incorporate vegan menus! WHAT?! Yes! Here’s a link to sample menus that @quarrrygirl uploaded to her site. While they’re not current, they give you a basic idea of what’s available.

Since I was on my own for dinner, I decided to go ahead and go all out with Botero’s Chef’s Vegan Tasting Menu. A full 5 course meal for $60. (menu on quarrygirl.com says $55, but no longer.) I called the restaurant to confirm that they were still offering it, and to make my reservation, and they assured me that it was offered every night.

After arriving at the Wynn, I realized Botero is actually located at the Encore, the sister hotel connected to it by a corridor of high-end boutiques. Botero’s staff was wonderful from the moment I entered. I was seated at a table overlooking the perfectly manicured garden and pool area, and the ambience was candle light, curtains, dim, and luxe. 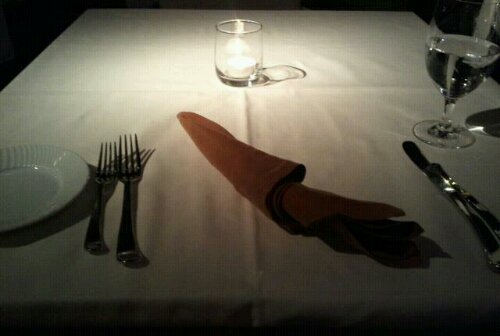 my lonely little table for one! 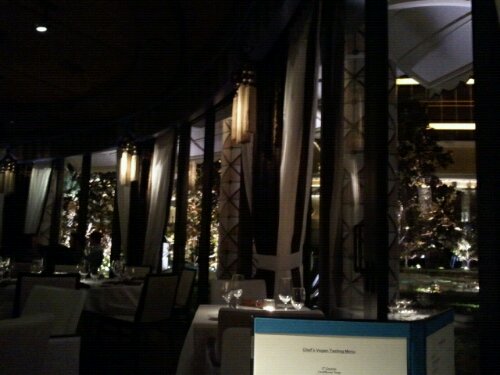 First came the bread, which I was absolutely thrilled by. This is truly one of the things I most miss about eating a vegan diet! Not cheese, not meat, etc… I miss being able to go to a restaurant and get served a beautiful basket of fresh bread! It came with two different types. One of which was like a soft pretzel roll, complete with granules of salt, delicious! The second was a crusty sourdough (I miss you sourdough!) with cranberries. They served it with a ramekin of butter, which they assured me was vegan. (It tasted so much like real butter! Maybe I’ve been doing this so long now that I don’t really remember what real butter tastes like?)

The next course was the Cauliflower Soup, made with soymilk and almonds. The subtle simplicity grows on you spoonful after spoonful. It’s low on salt, but very creamy and lightly seasoned with what I think was nutmeg. There are little bits of cauliflower throughout to give it a little texture, as well as the slivered almonds and herbs it was garnished with. Very good. 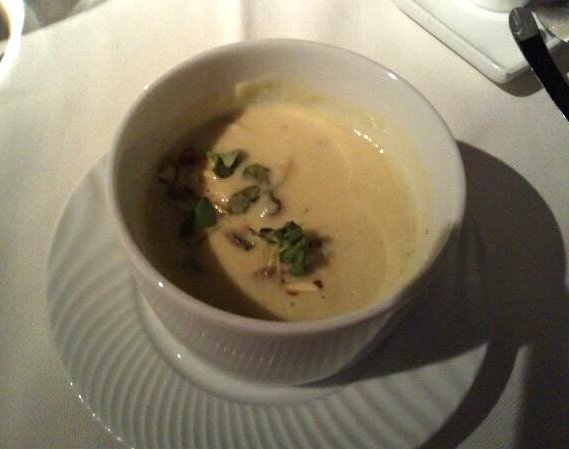 Next up was the salad course. The Fall Panzanella Salad described as having apples, pears, and grilled grapes. I was expecting a sweet salad, but the salad that appeared on the wooden plank with it’s lone crouton was quite the contrary. The bitter microgreens and vinaigrette gave it a decidedly sour note. I couldn’t tell which were shaved and which were slivered of the apples and pears, but they were also tart. The occasional grilled grape gave a slight contrast, but I wish there was more of a sweet & sour balance. The single crouton was large, and fresh. Toasty and buttered, but soft in the middle and able to pick up some of the dressing. Not  bad.

The next course was the Quinoa Pasta  described as a spicy gremolata with cashew cream. While it was creamy, it was definitely not spicy. It was a little bitter and a little salty, and not very good. I knew I had two more courses to come, and figured there was no point filling up on the low note, so I pushed it aside and nibbled a little bit more on the tasty bread.

Course four was the Roasted Acorn Squash. It came topped with tofu that had a really nice texture and was subtly seasoned. The squash beneath was served very simply with no discernible seasoning, but it was perfectly decadent just from its own lovely flavor . The pepitas added a smoky note to the dish that worked, but the abundance of bitter microgreens did not. They were just distracting to the central flavors and warmth of the dish, so I pushed them aside, and devoured the rest with gusto.

Throughout my meal, I was studying their regular vegan menu. I noticed that the other of the three dinner entrees was a Gardein chik’n dish. I usually prefer Gardein’s beef to their chicken substitutes, but I’ve had some very good dishes prepared with the latter in restaurants. Initially I was glad they had skipped it on the tasting menu, since I was more interested to see what their chef had created independently, but after the disappointment of the quinoa pasta, and simplicity of the roasted acorn squash dish, I wondered if it may have been a better option? 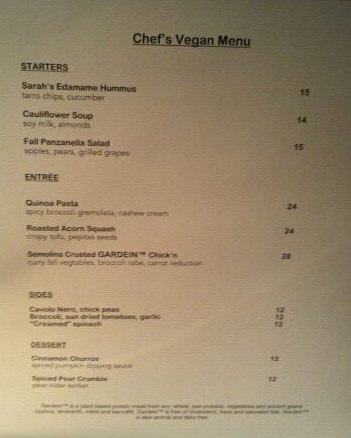 I also noticed that the dessert not being served was churros. Churros?! With spiced pumpkin dipping sauce?! I was immediately seized with want, but when my dessert arrived, I was placated. The Spiced Pear Crumble came elegantly adorned with a single preserved pear slice atop, and the execution elevated this simple fruit, which is notably not my favorite, due to its gritty texture, to something special. The pear-cider sorbet it was served with was surprisingly rich and provided the perfect contrast to the warm, spiced crumble.

Thoughts: Although there were some nice parts to the menu, I must say, overall, I was slightly disappointed with the food. I was really expecting to be wowed at this caliber of a restaurant. The ambience was nice, the bread was great, and the  service was impeccable, but if I had ordered either of the entrees at the price point they were listed for on the menu, I would have been even more underwhelmed. I realize that this is not a vegan restaurant (actually, it’s a steakhouse!) but I did expect more. While I do appreciate what they’ve done at the Wynn resort so far, I think they still have just a little bit further to go, at least at Botero.