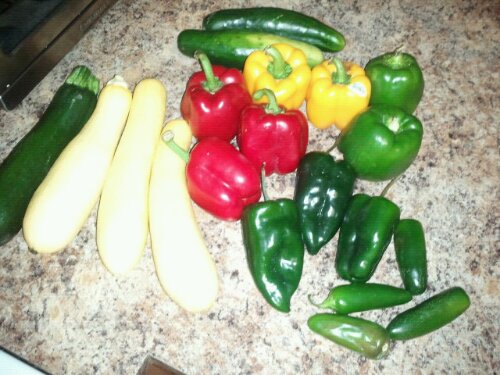 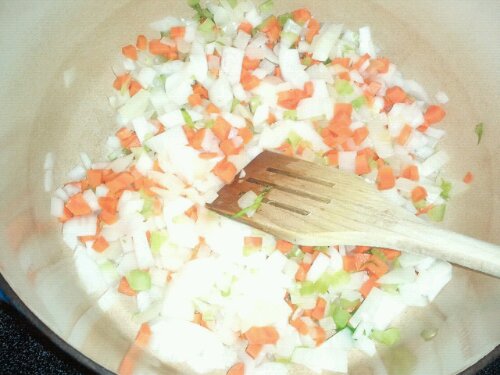 I’ve been in bed for the last three days sicker than I’ve been in years. Since eating fully vegan, I usually just get sick for a day or half a day, and it goes away, so this was pretty odd. I’m blaming this one on the [not vegan!] flu shot that I was forced to take for work. I got the injection last Thursday, and Thomas was sick all last weekend. I think the two compounded to give me one hell of a nasty bug. What’s my point? I needed soup!

My mom dropped off a big bag of veggies yesterday, and today I was finally feeling a bit better and able to stay in the kitchen longer than 3 minutes without having to go run for a tissue. I based this around a north african chickpea soup recipe that I used to make a lot. Mine has a ton more veggies in it, though! Tomatoes would be great in here too if you have any.

1. Spray a large dutch oven or heavy pot with olive oil and heat to low-medium. Add onions and carrots. Cook until they begin to soften about 5-7 minutes, while you cut your other veggies. Raise heat to medium, add peppers & spices, and cook for another few minutes.

2. Add water, chickpeas, frozen greens, and squash. Bring to a boil and simmer for at least 15 minutes, but 30 or more is better!

* Fat & Sodium will vary based on the broth or bouillon you choose!