I hadn’t been to Disney in years! I was super excited to hit the Magic Kingdom with Thomas, but I was also super excited about my vegan options after I read this blog early this year. Granted, it was from 2009, but still, a 6 course vegan feast made by Chef TJ sounded worth the trip alone! I made my reservation gleefully and checked off all of my “allergies”. Morning of, I also called the dining hotline as suggested, and they told us that the chef would come over at the begining of the meal to discuss options. She gave me an additional allergy number to call, but after listening to the automated options, I determined there wasn’t much else to say. (I wasn’t able to find a direct number to the restaurant online; we should have asked for it.)

On the ferry, off to the Magic Kingdom!

I was immediately hungry upon arriving to the park. We headed over to Tomorrowland to Cosmic Ray’s Starlight Cafe since I had read they had vegan Gardenburgers and vegan (&gluten free) tapioca based rolls on request. I hopped in the burger line and stepped up to the podium to place my order. As soon as I mentioned the vegan bun the attendent asked me if I had an allergy, or if it was something I didn’t like. I told her politely and firmly that I DON’T eat dairy or eggs and she then called for an allergy order person to come over.

They pulled out a book for me (which it seems they have anywhere they sell food) which had all the ingredients listed for all of their food options and had me confirm that I approved of both the bun & burger contents. They placed my allergy order and told me it would be about 5 minutes extra wait time, which was no biggie. Thomas had long gotten his meal and been patiently waiting for me by the time it was delivered, but we were both happy I was able to get a vegan lunch.

From here we went on Snow White, Small World and Pirate’s and picked up some (vegan by my scrutiny) snack mix from the pirate’s shop while we waited to say Hi to our friend and pirate’s worker, Lauren.

Lauren got us into Pirate’s again for a no-line second spin and we headed off to Thunder & Splash mountains. We hit up the Haunted Mansion next, relaxed for a bit on the people mover and watched the Monsters Inc show.

We were walking over to the Jungle Cruise when Thomas stopped suddenly after picking up the yummy scent of the glazed almonds (not pictured) from a nearby cart. I asked them if I could see the ingredients and they pulled out the book. Unfortunately neither of the cart operators were able to find the page. The older woman asked what I was avoiding, and I told her dairy, and were they made with any butter? She said no, and started to list off the ingredients… almonds, brown sugar, water… none of the things she said were non-vegan, so I nibbled a few along with Thomas, but ask to see the list of ingredients if you want to be sure.

After the jungle cruise we were ready to head over to the Polynesian resort for our dinner at Ohana. When we checked in with the hostess, my “allergies” came up with my reservation and she told me the chef would be over to discuss them with me after we were sat. We were a little early for our 9:30 reservation, but only had to wait a few minutes before the next hostess took us back. She also made mention of my “allergies” as she guided us past the kitchens and assorted meat skewers on our way to the table.

Chef Alejandro came over shortly after our waitress took our drink order. I asked him if Chef TJ was still with Ohana and explained how I had made a reservation because of the amazing vegan feasts he had created in the past. He became slightly defensive and explained that he had replaced Chef TJ, and that with the amount of business they have, to create such custom meals was not realistic and that maybe that was why Chef TJ was now at the Grand Floridian’s restaurant. So yah, CHEF TJ IS NOW AT ONE OF GRAND FLORIDIAN’S restaurants. So you make your reservation at the right place, and try to get a number so you can call ahead and make sure he’s working!

Maybe he caught himself at this point, I don’t know, but after saying all that and staring at me blankly for a sec, he went on to tell me what he could do for me.

Now, keep in mind this is a meat based restaurant. The kind where they are coming to tables every few minutes with different meats on skewers. It’s a set price course meal of coconut bread, salad, all you can eat meat, and a pineaple coconut bread pudding. So about now I’m feeling super stupid for having made a reservation here, of all places.

He asked me if I ate honey. I said sometimes. He just looked back at me, so I said “yah, honey will be fine”. (Sorry hardcore vegans! I know you probably hate me for saying that! I do eat honey occasionally, so already being uncomfotable & dissapointed at this point, I wasn’t trying to worry about the greater good of the vegan world.) He said he could do a salad with a honey vinagrette for both of us, and an appetizer of pita chips, hummus & baba ganush, for dinner a stir fry of mixed vegetables over rice. I piped in, did he have any tofu? Yes, he did. Tofu and veggie stir fry and that I could have the bread pudding & ice cream for dessert. I reminded him that I didn’t eat dairy or eggs. (Hi, this is why we’re talking, remember?!) Oh right, he wrote that down on his note pad and underlined it. Fresh fruit for dessert. So, I asked, did he have toffutti ice cream because I read they did, and he asked vanilla or chocolate, and I chose the latter. Him forgetting my dietary restrictions halfway through our conversation was not very reassuring. Upon further reflection, I could’ve asked him to use agave instead of honey, because there was agave in my mojito!

Our phones were both pretty dead at this point so I couldn’t get pictures of the food. It was all really good though. I was so thrilled by the time my stir fry came out; Thomas had already been served copious amounts of meat. My tofu was fried and really delicious, and I even gave Thomas a piece to try, because I love him that much! Hah ; )

We were able to snap a shot of my dessert, which ended being HUGE. I definitely left there happy & incredibly stuffed despite the difficulties. 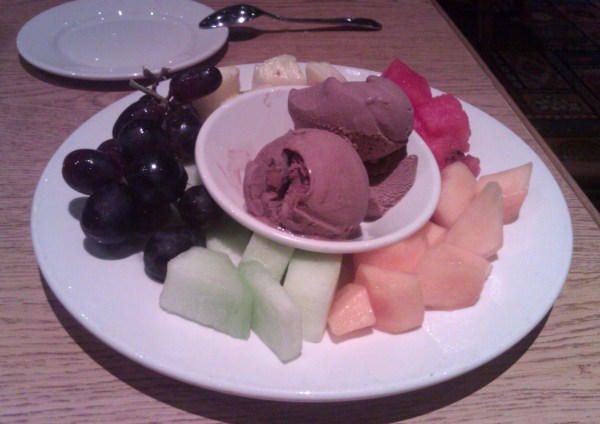 Would I recommend Ohana to vegans? Well, I wouldn’t go out of your way to eat there. It’s a little weird to be in such a meat centric environment, if you aren’t used to it, and clearly the chef wasn’t exactly overjoyed about it. If your family is dying to go there, it’s nice to know you can eat there, and eat very well actually, you’re just going to have to be a bit pushy about it. (I hate that!) I will definitely do a little better research next time to try to get a meal from Chef TJ, but it ended up being a really nice meal for us. If you’re there at the right time, you can see the fireworks from the Magic Kingdom through the large glass windows too.

We were too stuffed to go back to the park with our fast passes for Space Mountain (the line earlier without was 90 minutes) so this concluded our visit. A good page to check out is the Disney special dietary requests page. They will also allow you to bring in a small cooler with food if you have an “allergy or intolerance”, so look into that too. You can make your dinner reservations online or call (407) WDW-DINE or (407) 939-3463.

The other thing I wish we had done was go to the all vegan bakery, Babycakes in Downtown Disney. I love babycakes in New York, and was thrilled when I found out they took over the space (along with a couple other restaurants) where McDonald’s used to be last fall! So if you can, pay them a visit! They’re brownie cupcake is pretty darn good! : )

2 comments on “Vegan in Disney for a day”