I was so excited to take this one for a test drive, especially since I read the back of the box and found out they’re using Daiya cheese.

The back of the box also proudly boasts that this is the 1st frozen vegan pepperoni pizza available. The thing you have probably already noticed is the pepperoni not sliced as you would expect, but instead cut into plentiful tiny cubes.  No problem there, but they didn’t really leave any crust, and I am definitely into crust, so I was a little dissapointed.

The baked result was good, and the pepperoni was really tasty. It was also good cold, the next day! My main complaint is that it’s the typical sucky thin crust common to most cheap conventinal frozen pizzas. With an $8 price tag though, I probably won’t be buying this again. I’ll just throw some Yve’s sliced pepperoni on a [Daiya] cheesier pizza if I get the urge.

I had also purchased their Italian Sausage and roasted vegetable pizza. This one was actually really delicious. Same thin crust, obviously, but the combination of veggies was really good, and it was cheesier. 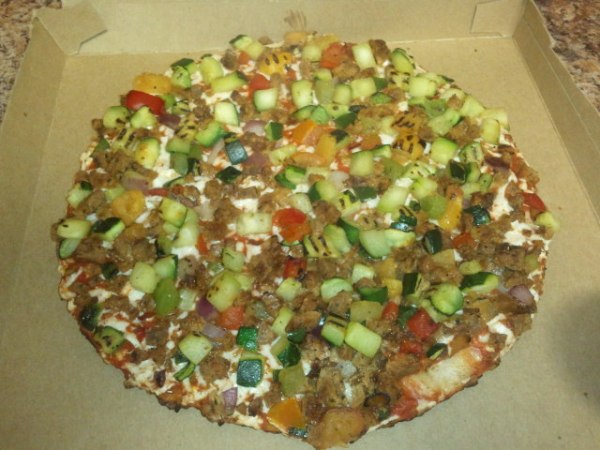 I ate about 2/3 of the pizza before I noticed a hair sticking out of part of it. That’s right. A hair that looked nothing like mine. So I ended up dumping out that last portion by where I found it. Too bad, I hate to waste yummy food.

So yah, that, along with the too thin crust, and $8 price tag, will probably dissuade me from purchasing again. I thought I’d give them a try though. I like their other products like italian sausage, bratts, and pre-seasoned tempeh.

Anyone else try these? or the cheese one?