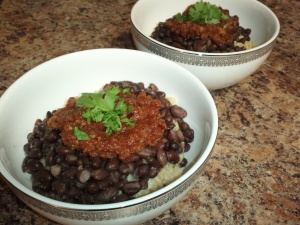 So I was super beat last night, and decided I could muster up the strength to make this fairly simple recipe from the Veganomicon. I’m just going to tell you right up front, if you are in a hurry and don’t feel like waiting 40 minutes for the canned black beans to simmer, don’t! I think it would have been just fine if I heated the rinsed black beans up and just put this sauce on top, because that’s really where all the flavor comes from. (I will do this next time!)  I had made this “cheesy” brown rice when I got home using some things that I know usually go into vegan cheese sauce/nutritional yeast sauce, and it made a tasty bed for this dish, so I’ll include the recipe below. PS – Want the *RECIPE*  ? Here’s the link to the sample page on amazon.com!

See all that foam? That’s the stuff in beans that creates gas. Be kind to yourself and others, and rinse your beans thoroughly first! ; ) 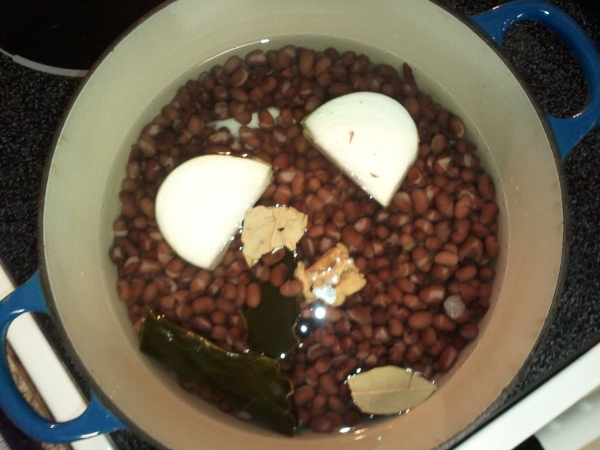 So I read a bunch of reviews of this recipe before making it, and some of them said that the beans themselves were a little bland. The recipe calls for 2 cans of rinsed black beans, 1 bay leaf, 1 onion peeled & halved and 3 cups of water to be brought to a boil and simmered for 40 minutes. I added an extra bay leaf, a bouillon cube and 2 pieces of kombu (seaweed for tenderizing beans & reducing gas). At the end I drained the beans and removed the bay leaves, onion and kombu.

Hooray! Since you’re going to dirty your food processor to make the sauce anyway, why not use it to chop your onions and garlic first? I love doing this and saving myself the knifework and tears! And about 5 pulses later…

I just lightly misted a skillet with olive oil instead of using the 3 tbsps as recommended. I also started them out on a low-med setting and cooked them for double the time called for and then brought them up to medium to get some color on them before adding the peppers and adobo sauce. 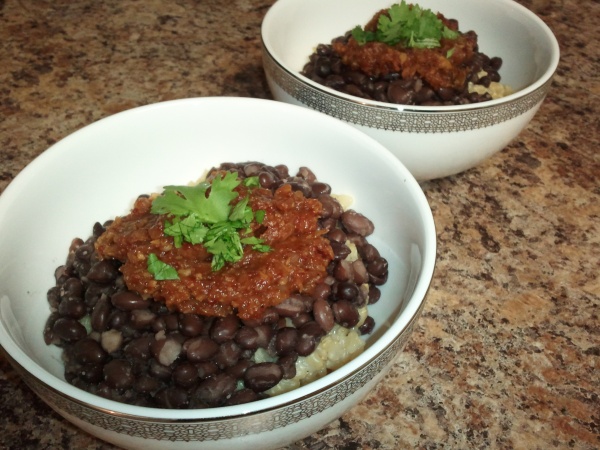 Results: I sprinkled with some fresh cilantro and served over my cheezy brown rice. (recipe below!) The fresh cilantro was a nice fresh contrast against this very warm cooked dish. The sauce WAS delicious. I will definitely make the sauce again to serve over simply heated beans.

Directions: Add rice, water and bouillon to a medium pot and bring to a boil. Boil for a minute or two, cover and drop to low heat to simmer for 45 minutes. Turn off heat and mix in all other ingredients, to taste.