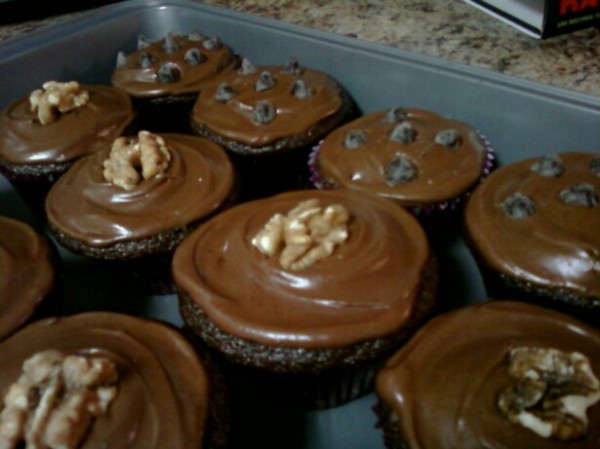 I have often wanted to make these brownie cupcakes, but I finally got around to actually doing it! Someone brought in some little chocolate cupcakes last week at work and I got a whiff of the frosting, and had been craving it since ever since. I figured I couldn’t go wrong with VCTOtW‘s recipe. (They always come out awesome.) These also sounded interesting because they call for some not so ordinary ingredients like black cherry preserves and bourbon. The recipe makes 15 cupcakes, so you’ll need another pan (with the empties half full of water to prevent warping) or some individual silicon or foil liners as recommended. I was going to use ramekins for the extras until I found the ghost shaped foil ones that I picked up on clearance after Halloween. (totally forgot about those!) The frosting it’s paired with makes a nice amount for the topping, but not for crazy piping. (which is fine because usually it’s too much, and I don’t like fussing with piping.)

Oh! One more thing… the recipe warns to not overfill  your liners or your cupcakes will sink, but then tells you to fill them up later in the recipe. Just fill 1/2-2/3 full. (my foil ones said 1/2 full.) I read some other people’s reviews, and a lot of people had trouble with the sinking. Mine came out just fine. If you fill them 1/2 way they’ll come up to the top. 2/3 or more and they’ll muffin top.

I dressed them up with walnuts and chocolate chips!

These were well received. Though the texture is a bit more light and fluffy than either a cupcake or a brownie. Still, tasty. (PS- They became a little moister and denser after a couple days in the fridge!) I was just expecting a more dense brownie type bottom. The frosting was a perfect brownie type frosting that sort of forms a little bit of a shell. As promised the cherry preserves and bourbon were not detectable in the finished product, though I know there’s a cherry bit or two lurking in there somewhere! Oh, and just in case you were wondering… the foil ones were pretty much the same texture as the pan ones. : )