So since I posted on the chickpea cutlets, I went through the Veganomicon and picked out a few more recipes to try. I picked this since I wanted to get some kale in this week, and I’ve been wanting to try to make something with shitake mushrooms. Since I started eating Amy’s roasted vegetable pizza I’ve had a sneaking suspicion that I like shitake mushrooms, and I wanted to confirm this. I’ve always avoided mushrooms like the plague, so I’m not sure if you know what a BIG deal this is. Turns out shitakes are delicious… at least in this dish. : )

This was a wonderful bunch of firsts. I had never had udon noodles, and they are pretty high in protein. Basically like whole wheat spaghetti, and the two could certainly interchange in this dish. Also, I finally bought some pricey mirin. So I can now make dishes that call for it. I bet it’s way cheaper in an asian market, but I got mine at WF. I also finally bought some miso. Alicia Silverstone says in the kind diet that barley miso is the most medicinal, so this what I bought. I thought it was funny that my miso came with a health advisory right inside of it, in fact.

Since I was unfamiliar with this dish and most of the ingredients, I went ahead and prepped everything before getting started so I could just focus on cooking and timing. 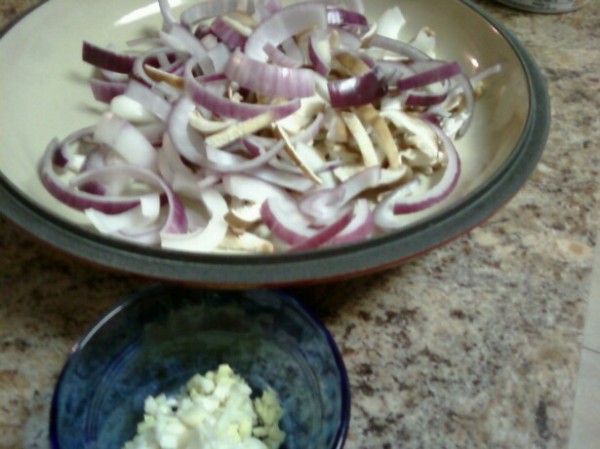 I put in just a little bit of extra ginger. It was really good. Definitely a keeper recipe, and I got the kale in too! Plus I got to use the new chopsticks that I picked up in NYC last time!  😀