getting this dish right took me two days! yesterday i really had a craving for roasted butternut squash and onions. today, i still liked the basic flavors of the dish, but needed to balance it out with something savory… so i added some smoky, salty TVP. this would also work over a whole grain instead of pasta. 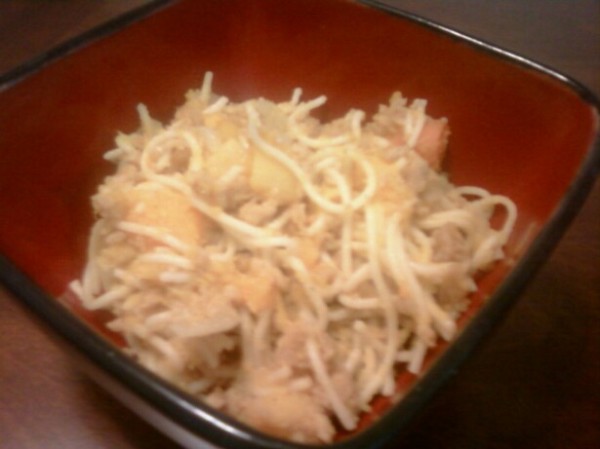 1. Pre-heat oven to 350*F, and prepare baking dishes by misting with olive oil. Spread veggies out into a single layer in baking dishes and mist with olive oil, salt & pepper to taste. Sprinkle lightly with cinnamon, cumin and cayenne, and toss to coat. Bake for 25-30 minutes.

2. Prepare TVP: In medium saucepan bring broth, liquid smoke and shoyu to a boil. Remove from heat and stir in TVP, cover and set aside.

**NOW ABOUT THOSE BUTTERNUT SQUASH SEEDS!
you didn’t throw out the seeds with the guts did you? do you like pumpkin seeds? these are not as plentiful, but are even more delicious. when you scoop out the squash guts, throw it all in a colander and get all the mush off. then just place them in a dry skillet over low-med heat. shake often, until they dry up. you can salt them and eat them hot, or put them in something air tight for a snack!