something wonderful has happened to orlando… it has become vegan friendly in the last few years!  i’m even finishing up some very delicious vietnamese vegetarian pork leftovers as i type this to you now. the vietnamese part, that’s not new. if you are driving down 50/colonial, just east of orange, there is a vietnamese strip of restaurants and shops that’s been there forever. but just east of that, there’s now a loving hut. i wasn’t in a huge rush to go to loving hut, since i’d already tried the one in NYC, and thought it was just okay. however, there’s also a new hot spot over by O-town’s antique district: ethos vegan kitchen.

ethos vegan kitchen is a really cute little place in a hip part of downtown. it’s a few blocks before white wolf cafe. and as ash put it, is full of what seems to be all the hipsters, hipster families, hippies and lesbians in town.  it’s a casual, walk-up and order type place that then gives you a number and brings the food to your table. there is both indoor and outdoor seating. 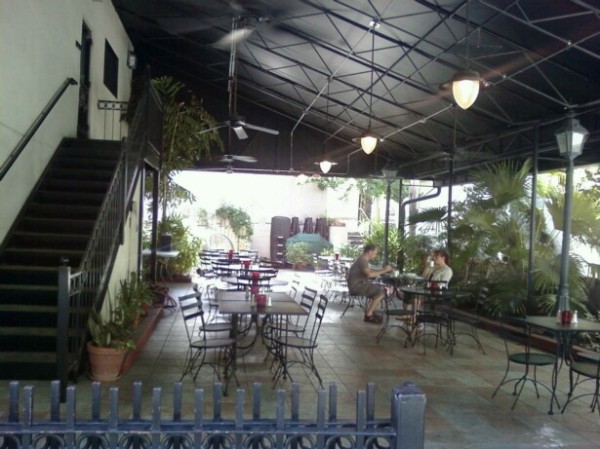 the staff is really friendly and happy. the menu is limited, and has both hits and misses. if you ask for a glass of water, you get to have bottled water from their cooler. best of all, i found out today that the owner runs a vegan hot dog cart downtown for all the hungry people coming out of clubs and bars! super awesome. jeremy (omnivore) says he’s had them too, and that they are not only good, they’re cheaper than the meat dogs, and give you an array of topping choices.

we went not once, but twice (1 dinner, 1 brunch) in order to give you the most thorough review possible!  (though the first time i forgot to take pictures until the end!)

Dinner: chili, and philly cheese steak. 3 of us ordered the seitan based philly. (on both the win & fail list.)

jeremy really liked his chili, and bobby & mary were super impressed with their phillies.

the biscuits were AMAZING, albeit greasy, but hey, this is breakfast food. they came with a totally delicious jam, but i’m not sure what the flavor was.

jeremy liked how smoky the sausage gravy was, and the tofu scramblers thought that theirs was yummy & well seasoned. the homefries were nicely seasoned and cooked. overall delish. jeremy also had a pretty fruit cup & mimosa too. 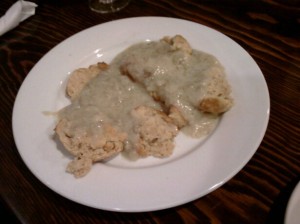 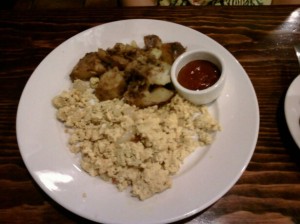 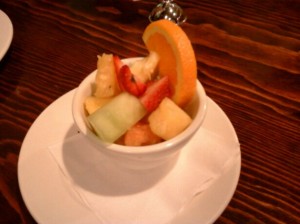 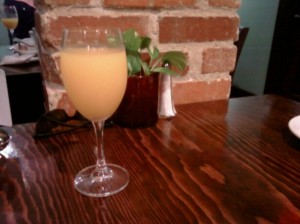 for me, although the cheese steak was tasty, the seitan was so greasy it sort of killed it. i could literally squeeze butter out of my soaked ciabatta roll by pressing with a fork. bobby & mary felt this was allowed, because it was after all supposed to be a cheesesteak.

laura also had an entirely greasy, and thus soggy pizza. she did get seitan as a topping though, and i think this was the root of all the problems. the preparation is just WAY to oily!

ash was equally unimpressed with her mushroom wrap because the mushroom was completely waterlogged and dripping through the wrapper. she was also dissapointed that her fresh fruit side was just a slice of watermelon. she was expecting variety here. well, more like jeremy’s brunch fruit cup.

my coleslaw was uncontested as the WORST! i was so excited too when i saw it on the menu. but it literally tasted like slaw mix DROWNED in veganaise. no seasoning at all. just some slaw and a ton of vegan mayo. bleh. mary actually referred to it as abysmal. bobby thought it was awful, but put hot sauce on it and made it disappear.

i think it’s a really great place, they just need to work on a few of the dishes. since it’s a pretty small menu, they should really make sure that everything they do offer is really the best they can make it. the service was excellent, and it was a very cool, clean place to visit. it’s also very reasonably priced, especially for brunch. despite the first night’s dinner being sort of hit or miss, i thought we should go back to try brunch, and i’m glad we did. have a biscuit. really! i could have had several! : )

out of 5 possible stars: