okay, so i’ve been meaning to try this recipe for what is essentially chickpea seitan, the veganomicon chickpea cutlets, pg 133. since i had to make some bread crumbs in my food processor anyway, i made the entire recipe in there by switching to the dough blade.

i started with 1 small piece of toast and pulsed it until i got fine crumbs. this really worked out because it gave me the exact amount, 1/2 c. that i needed.

after setting those aside, i added the chickpeas and oil and pulsed until they were thoroughly mashed.

at this point i switched the metal blade for the dough blade, and added all the other ingredients. (subs: i used shoyu for soy sauce, lemon juice for zest, and turmeric & cayenne for the hungarian paprika) this worked really well, and i could definitely see all those strings of gluten.

from here you just divide the dough into 4 patties, and pan fry or bake. instead i used my new large skillet sprayed with olive oil, and this worked well.

(as an aside, i’m really impressed with my new LC skillet. it has the same black enamel that they put in their grill pan, and this was my 3rd use and it’s already just about non-stick. i’m so impressed in fact, that i will probably buy a small one now to replace the small non-stick pan i’ve kept around for pancakes.)

side salad: recipe called for 1 c. of cooked chickpeas. i used a 15oz. can, and saved the extra for a side salad.  to the chickpeas i added chopped red pepper & onion, spinach, and sprayed it with a little olive oil, splashed some white balsamic vinegar, and salt & pepper. 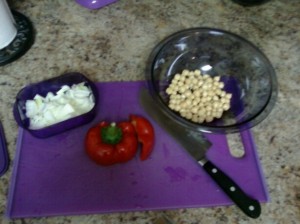 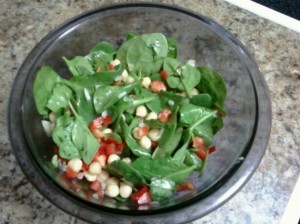 these were pretty great. i can see that all kinds of legume/flavor combinations are possible as variations, and they were easy to make. if you’re serving to guests, you may want to make an extra big batch. ; )