Yes, this is another vegan food blog.

(Here is a picture to prove it, right off the bat. This is the tempeh from the reuben’s I made the night before last.) 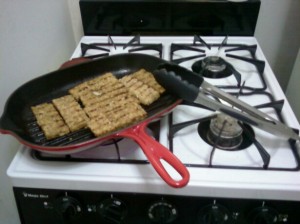 I got sick of posting my nice little pictures, sans the descriptions they deserve, on facebook updates. Plus, my husband insisted I needed a blog. He wants me to write a cookbook, so this is our compromise for now : )

I cook fairly often, so I should have plenty of material to post. Not only that, I recently moved to NYC (Brooklyn, specifically) and they have tons of vegan places here that I can whip the camera phone out for.

Why the camera phone vegan?

Unfortunately, I had a nice second hand digital SLR until I moved into our first place in Brooklyn just over a month ago. One roommate expressed a need for a camera such as mine for a class, and a couple of weeks later, POOF! Fancy camera gone. (Maybe it will show up at the end of the semester? ::crosses fingers:: ) I do have a crappy, purple digital camera that I alternate with. It has the worst flash on the planet, but I bought it not for it’s ability to take pictures of friends in dark bars (which would have been helpful!), but because of the body color. I’m a sucker for purple, as will be evident in time, I’m sure.